Hundreds take part in marathon, cycle rally I DC calls upon youth to wipe out drugs from state 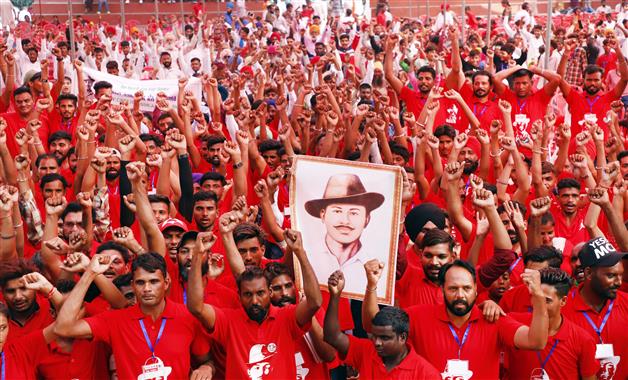 Deputy Commissioner Jaspreet Singh today led hundreds of volunteers during a cycle rally and marathon organised by the district administration on the occasion of birth anniversary of Shaheed Bhagat Singh here at Guru Gobind Singh Stadium. The DC himself participated in the cycle rally by riding a bicycle making an appeal to youngsters to wean away from drugs by adopting physical activities in their lives.

He said it was need of the hour that all of us follow in the footsteps of Shaheed Bhagat Singh to make Punjab a drug-free state. He added with collective efforts by the one and all, the drug menace could be eliminated from society.

He mentioned that the drug menace was the biggest hurdle in realising the dreams of our forefathers who had fought relentlessly for emancipating the country from the yoke of British imperialism.

He urged people to join hands with Chief Minister Bhagwant Mann Singh-led state government in its endeavour to wipe out drug abuse from society, which would be a humble but befitting tribute to our youth icons Bhagat Singh, Rajguru and Sukhdev.

He also lauded the efforts of people of Jalandhar who joined the initiative of cycle rally and marathon held by district administration on this occasion.

Prof Manoj Kumar, Vice-Chancellor of the University, said the day held importance to all DAV institutions as Bhagat Singh was one of the illustrious DAV alumni. While discussing Bhagat Singh’s life as DAV student, Manoj Kumar said everyone owed the martyr the sincerest gratitude for his supreme sacrifice. The Registrar of the University, Prof KN Kaul, described how the young freedom fighter shaped the freedom movement by influencing the youth.

Meanwhile, the cycle rally at Lyallpur Khalsa College was flagged off by Dr Harjit Singh, the grandson of freedom fighter Hira Singh ‘Dard’. Principal of the College Dr Gurpinder Singh Samra, congratulated the students for enthusiastically participating in the rally and other events. He said apart from the cycle rally, a documentary highlighting the life of Shaheed Bhagat Singh was also screened in the college as a joint initiative of the Center for Historical Studies, NSS and NCC. Besides, a drama ‘Inqlab’, written and directed by Dr Suman Chopra, was also performed