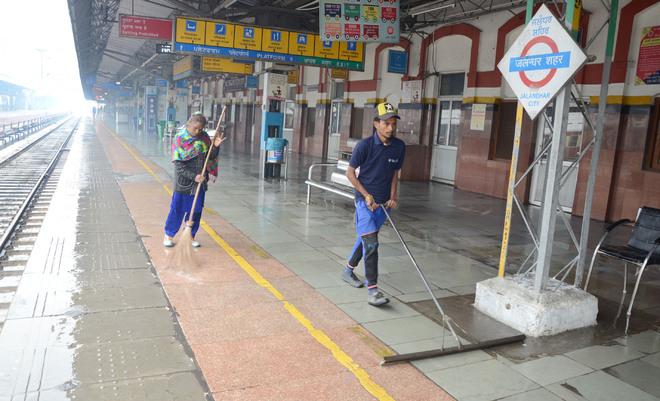 Railway staff cleans up platform at the Jalandhar City Railway Station on Monday, a day ahead of the resumption of railway services. Photo Sarabjit Singh

Authorities at the Jalandhar railway station carried out a security drill as rail services are slated to begin on Tuesday after a gap of nearly two months.

The Railway Protection Force staff roped in the dog squad and conducted a long recce of the track area leading to the railway station. The technical staff checked the track. The platform staff carried out cleanliness drive. The commercial railways staff, too, remained busy rechecking the inventory of the huge stacked up parcels and moving these to far-off locations via the goods train that began to chug off on Monday.

Railway Station Superintendent SS Walia said: “We sent off some goods trains on Monday. On Tuesday, three trains including Frontier Express from Mumbai, Paschim Express from Bandra and Flying Mail from New Delhi are expected to reach here in the day.”

The reservation counter at the railway station, too, had more people waiting to get their tickets booked. As some passenger trains are slated to resume tomorrow, several people had come for inquiry purpose as well.

“We have a marriage in our family in Mumbai next month and we still have not done any preparation. I am here just to confirm if Paschim Express will be shuttling around December end,” said Sukhdeep Singh, a resident of Pholariwal.

Barinder Singh, a government employee from Amritsar, however, said he was peeved over the fact that the railway services may not resume between Jalandhar and Amritsar owing to members of Kisan Mazdoor Sangharsh Committee still maintaining a stand over continuing to block railway track over the issue of three farm laws brought out by the Centre.

“Owing to my job in Jalandhar, I have to commute here daily from Amritsar. It is always easy to come here by train than by bus. The fact that rail services will resume brought me joy but I am still not sure as to when will I be able to come here via train from Amritsar.”