Jalandhar: Shobha yatra taken out on eve of Ravidas Jayanti : The Tribune India

Jalandhar: Shobha yatra taken out on eve of Ravidas Jayanti 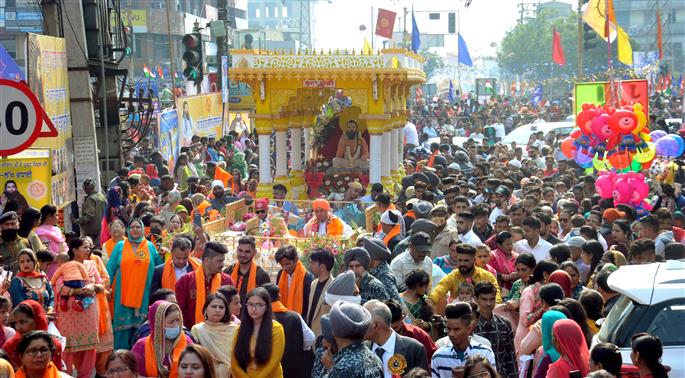 A shobha yatra being taken out on the eve of Guru Ravidas Jayanti in Jalandhar on Tuesday. Malkiat Singh

A large number of devotees participated in the shobha yatra taken out on the eve of Guru Ravidas Jayanti here on Tuesday.

The tableaux had decorated palanquins and well-designed artefacts which displayed stories about the life of Ravidas. The devotees paid respect to the palanquins and chanted religious hymns along with accompanying jathas. Langar stalls were installed at various places on the route.

Representatives of various political, social and religious organisations participated in the yatra. Lok Sabha MP Chaudhary Santokh Singh and MLA Pargat Singh were also seen paying respect to the palanquins and walking along the procession along with other devotees.

Seth Satpal Mal, a follower and organiser of the shobha yatra, said after two years, the yatra received a very huge response. He said earlier due to the Covid-19 restrictions, people from nearby villages and others were not able to participate. With the situation improving now, scores of devotees have travelled to Varanasi and those celebrating here had participated in the yatra.

He said Guru Ravidas was a spiritual ambassador and messiah of the poor and unprivileged sections of society, who taught everyone to lead a virtuous and noble life. He further said all the arrangements were in place, routes were diverted and police personnel were deployed to manage traffic.

Phagwara: A shobha yatra was taken out on the eve of Guru Ravidass Jayanti here on Tuesday. Representatives of various political, social and religious organisations participated in it. Hymns were chanted by jathas on the occasion. The yatra, which commenced from Ravidass Mandir at Chak Hakim, passed through different markets. Adequate security arrangements were made on the occasion. Congress candidate Balwinder Singh Dhaliwal, BJP candidate Vijay Sampla, AAP candidate Joginder Singh Maan and SAD-BSP candidate Jasbir Singh Garhi among others attended the yatra. The shobha yatra concluded at the originating point.