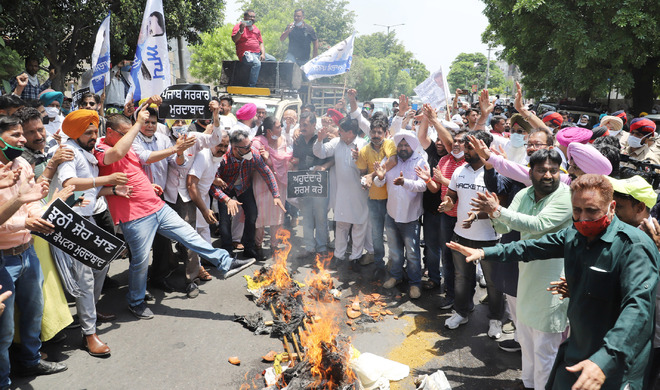 Activists of the Aam Aadmi Party today held a protest against the state government. Protesting against the provision of jobs to MLAs kin, AAP members marched from the Dr BR Ambedkar Chowk to the residence of Jalandhar MP Santokh Chauhary. Activists carried an effigy of the CM with them — fashioned after an ‘arthi’ or a funeral bier complete with a matki (earthen pot).

With practically no social distancing measures in place and many party activists even sans masks, the activists also raised slogans against the state government.

Speaking on the occasion, Gurinder Singh said if the state government did not withdraw its decision to give jobs to its favourites, then youth workers of the AAP shall be holding hunger strikes across the state. Gurinder said the state government’s decision was condemnable. Mahila Wing president Rajwinder Kaur and District president Olympian Surinder Singh Sodhi said the recent incidents in the state had proved that the promises of jobs in every home made by the CM were only meant for some chosen persons and MLAs.