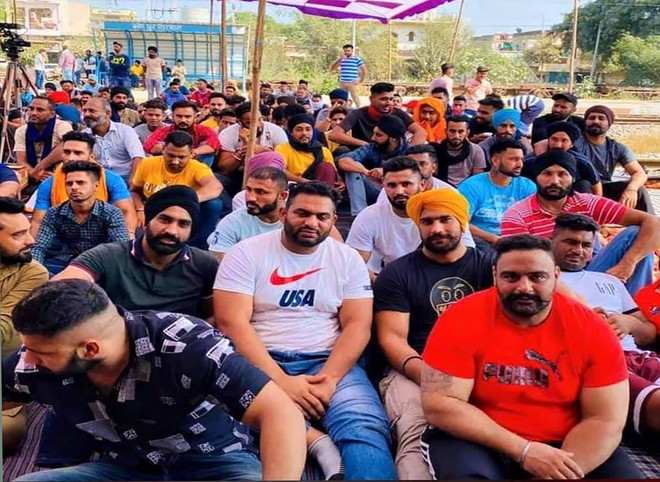 Several players were a part of the dharna at the Bhogpur railway station.

After popular Pollywood singers in the state, the national and international players have come out in support of farmers agitating against the contentious farm laws passed by the central government last month. Over a dozen Kabbadi players, wrestlers and other sportsmen extended their support to the Bhartiya Kisaan Union in its ongoing ‘Rail Roko’ protest.

The players were part of their sit-in dharna at Bhogpur railway station. Toni Sandhu, general secretary, Major League Kabbadi Federation, said, being a member of the farm community it’s our responsibility to add more fuel to the voices of farmers. “Farmers are support system of our country. I am myself a farmer. My family members survived on farming only. Being the players of the state, we will always stand with the farmers for their rights. The Bills were passed without the consent of the farmers and now the government has turned a blind eye towards them. Trade would be impossible after its implementation. We should never forget that it’s the farmers of the Punjab only who paid a huge cost for ‘Green Revolution’. Punjab was never a paddy dominant state it was after the implementation that the farmers started producing paddy here, that almost depleted the ground water level. Hence, it’s unacceptable for the farmers to comply with the Bills which are against their profit,” added Sandhu.

Similarly, Nanni Gopalpur, another Kabbadi player, said, the government should have taken the approval of farmers before drafting the Bills. Outpouring his support, he added, “The lathi charge on farmers is equally condemnable. It is depressing that instead of working in the fields, the farmers are forced to hit the roads and railway tracks. Already a small of chunk of farmers are getting minimum support price in the state and the anti-farmer laws would further decrease its credibility, hence the Bills should immediately be withdrawn.”