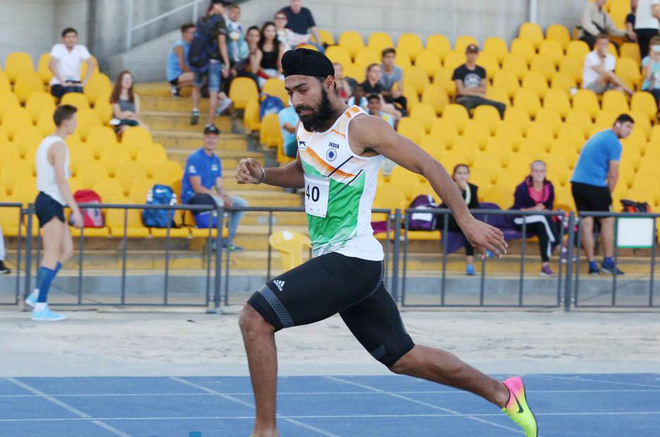 Gurvinder Singh, an athlete from the district

Gurvinder Singh (20), a star athlete from the district, who had won several international and national championships prior to the lockdown in 2020, is aiming to maintain his record in the 100m event this year. His personal best is 10.35 seconds but now he’s a man on a mission who’s looking forward to better that number. Having recovered from injuries, he is back on the track to prepare for the upcoming events announced by the Athletics Federation of India (AFI).

He is on to it. Besides waking up early in the wee hours, he is also preparing his daily meals as per his diet these days due to the college hostel being closed. He says that for the forthcoming athletic meets he is training his body for five hours daily. From strength to endurance, his coach is training him on various scales. A student of Lyallpur Khalsa College, Gurvinder clocked 10.42s in the boys’ 100m event to bag the gold in the (U-20) Asian Athletics Championships in 2019.

The 24th edition of National Federation Cup Seniors Athletics Championships 2021 is to be organised between 10th and 14th March in Patiala will define his athletic journey as it is the Olympics qualifying competition.

“After this competition our international tours will start. From 60th National Inter-State Seniors 2021 to Asian Youth Athletics Championships 2021, and four-five qualifying competitions for the Olympics are of massive importance to me,” added Gurvinder. His coach mainly focuses on stamina, rope drills, core strengthening and functional workouts. While most of the championships were postponed in 2020 due to the Covid-induced lockdown, however, it helped him gain the lost strength due to an injury.

“I spent most of my time recovering myself and gearing up for the next start,” he said. In the list of his achievement tally, his major achievements include a gold in the 2017 Youth Asia Championships, a silver medal in South Asian Games 2019, a bronze in Junior Asia Championships 2018 in the relay event and another gold in the Euro Asian Championships. He said the government should provide players with all the basic facilities for polishing the performance. Apart from a dedicated ground, they need a new block.

Punjab Budget LIVE: 48,989 vacancies to be filled; 6th Pay Commission to be implemented from July 1

Punjab Budget LIVE: 48,989 vacancies to be filled; 6th Pay Commission to be implemented from July 1