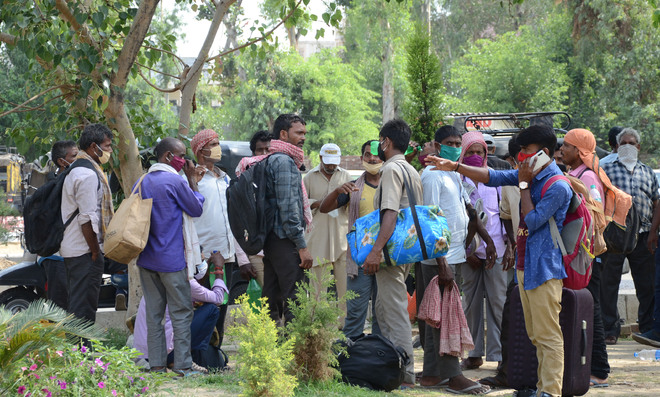 While neighbours, friends or relatives generally help each other with items of daily use and food, there is nobody to help labourers and daily wagers who continue to suffer. Tribune file

People who earn their living by doing labour are at the receiving end these days. When they contract the virus and are under home isolation, it becomes difficult for them to manage their homes and arrange ration for their family members.

Several ASHA and Anganwadi workers who have been at the forefront during these Covid-19 times and visit people in villages to take regular updates of their health status, reveal that daily wagers and labourers are the worst affected.

Recently, a 35-year-old labourer was infected with the virus along with his 30-year-old wife and a 2-year-old child in Gadaipur. An ASHA worker said the family was so poor that they did not have food and had run out of ration as they were in home isolation and could not go out to buy anything.

While neighbours, friends or relatives generally help other people with items of daily use, labourers and daily wagers suffer as there is nobody to help them. The ASHA worker said she had been getting calls from a Gadaipur-based Covid patient that he was running out of ration and was asking us to help him.

Amritpal, another ASHA worker, said, “In such cases, ASHA workers come forward to help and by shelling money from their own pocket, they try to help such patients as much as they can.” She said labourers were suffering amid the pandemic and hardly anyone was looking after them.

As per reports, the third wave is dangerous especially for toddlers and anganwadi and ASHA workers share that pregnant women and mothers who have just delivered their babies are now worried over their future. An anganwadi worker says whenever she visits homes to check on pregnant women, she is often asked the same question, “Is it true that the third wave will affect the babies?” “It is a normal psychology. Already, pregnant women are under stress at this time and now, new theories and reports are only making some of them more worried,” the anganwadi worker added.