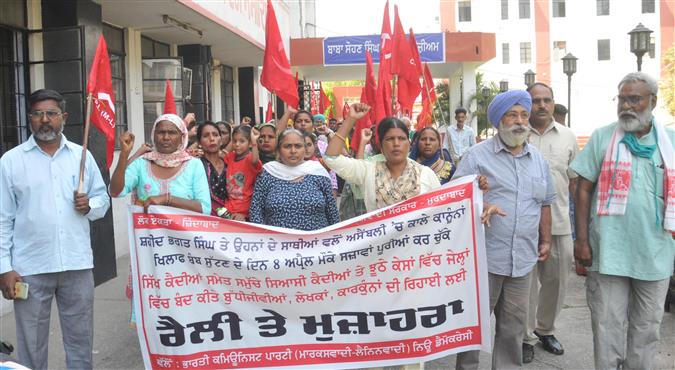 Members of the Communist Party of India (Marxist-Leninist) New Democracy on Friday held a protest against the non-release of Sikh prisoners who had completed their sentences and imprisonment of political prisoners, intellectuals, writers, journalists and activists in false cases. Leaders held a protest march in the city and submitted their demand letter written to the PM, through the DC, Jalandhar. They demanded immediate release of all such prisoners and withdrawal of anti-people’s laws such as the Unlawful Activities Prevention Act, Sedition Law, National Security Act, AFSPA and the Kashmir Public Safety Act.

On the occasion, party state leader Comrade Ajmer Singh said political prisoners those who have already served prison sentences or those serving their prison sentences are deliberately not being released. They said rather those speaking up against the central government, including political persons, intellectuals, journalists, those speaking of people’s issues, etc. were being jailed under serious sections without a proper trial. They said while those indulging in illegal activities are being protected by the use of these laws, and those protesting against such acts are being jailed.

Party leaders also said there was an attempt to give rise to communal tensions in the country. They also said journalists who were writing against people indulging in such acts were in turn being harassed.