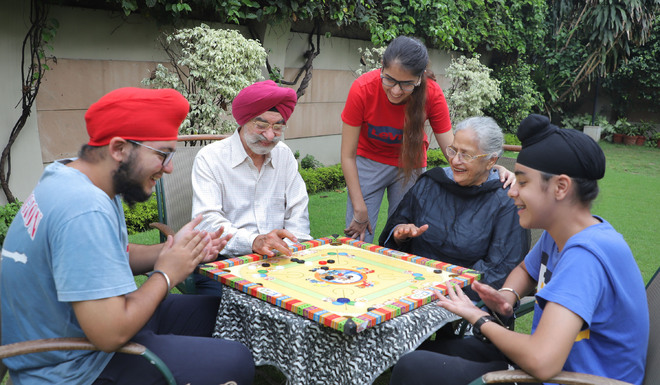 Elderly couple Harvinder S Juneja and his wife Narinder K Juneja play carrom at their home with their grandchildren to kill time during the pandemic in Jalandhar. Tribune Photo: Sarabjit Singh

Perceived as the most vulnerable group in the Covid times, life has slowed down much for the senior citizens. With everyone repeatedly telling the elderly to be at home and exercise more precautions owing to lower immunity levels and co-morbidities, their routine is somewhat similar to that of a convict – being retired to the four walls, but some facilities have come to their rescue.

While everyone confined can move about a bit in the city with some purpose or two and lively up their day, the senior citizens are on the receiving end. Their much-adored places like gurdwara or temples have been shut for long and a casual stroll in a park has been ruled out as well. Chit-chat with friends in the neighbourhood has become highly unlikely. In such a case, the only means of entertainment remains watching movies on TV and spending some time with their grandchildren, who are having it no different their older counterparts these days. Prabhpal Pannu, a realtor by profession, says, “I have aged parents and I really feel that these are challenging times for each one of us. My mother is bedridden for the past three years and we have to take extra care of her as we do not want her to be infected.”

For a businessman like me who has had a very active routine for the past four months, it is very difficult to be at home at all times. However, the bright side is that now I have a lot of time to spend with my wife and grandchildren. These days we enjoy telling them about Sikhism, narrating them sakhis of Sikh history and making them memorise path. We are missing our gurdwara and walking routine a lot. —Harvinder S Juneja (75), Owner, Juneja Soap Factory

However, his father is still fulll of beans and often insists on going out, which Pannu has to object to. “When we tell him to restrict his movement, he gets irritated and we also get into small conflicts which have to be tackled in a way. Eventually, I have to tell him that I will take him in the car to the market but will not allow him to step down. This is how we have to manage things,” he adds.

Several elderly businessmen feel that they have sort of retired now and their next generation has taken over. Barred from going to factories and offices which used to be their daily routine earlier, they now are finding it difficult to stay back home all of a sudden. Parkash Chander Sondhi, owner of sports goods manufacturing company FC Sondhi Pvt Ltd, and his philanthropist wife Neena Sondhi, say, “We are now living a retired life. Being told not to go to factory to be safe from the Covid, our son Anurag now handles the office. Initially, it was a little difficult to adjust to the new lifestyle but we have learnt to cope with the situation.”

Tech tetchy for some, saviour for others

Bored out of mind, technology has come as a saviour for the senior citizens. However, it is a mammoth of a challenge for the elderly to get used to technology so as to be able to handle their bank accounts or use phone for online shopping. “My children keep teaching their grandparents steps to manage bank accounts but they are finding it too difficult,” says Neetu Gupta, a resident of Green Model Town. She adds: They are not convinced with net banking and often insist on going to bank for all transactions!”

For many like Vinay Mahajan, who had his aged parents in Jalandhar and were themselves living away in Dehradun, the lockdown had separated them. “It was two months after relaxation of norms that I could manage to get a pass to take them along to Dehradun so that they no longer faced boredom and loneliness. In all this time, we were connected on phone and were using video-calling to keep them going”, he shared.

In the last four months, many NRIs who had their parents home alone used websites and social media groups to hire someone to take care of their aged parents and stay connected with them. Many NRIs used the Facebook page ‘NoticeBoard – Jalandhar by Tinu Luthra to contact their parents and check on their well-being.

Owing to the coronavirus outbreak, I am venturing out as little as possible. All my cases in the forum, which are pending, are being represented by a young lawyer, as I am being told by everyone to avoid going to public places. My outing is limited to morning and evening walks in my locality. —KC Malhotra (86), Consumer court counseller

It is not easy remaining confined to home for four months at a stretch. This week, when I went out for a lunch with my children and grandchildren, it was a feeling that cannot be described in words. However, hard as one may try to kill time at home, remaining indoors day and night is not easy for someone like me, who has remained socially active all his life. —DK Umesh (70), A senior citizen

Though almost everyone has had psychological issues these days, it is the elderly who have suffered the most. They are under many restrictions from the family and it is becoming increasingly difficult for them to bear it all. Since many of them are unable to express their feelings, they have been silent sufferers. —Pallavi Khanna, Psychologist

As many as 50 per cent members of the Rotary Club in Jalandhar are senior citizens and we are trying to enthuse them by organising at least two webinars every month. The last we organised with the Rotary Club, Lahore, went very well as most of our senior citizens have had a Pakistani background and really enjoyed going down the memory lane and sharing that Pak connection. —Prabhpal Pannu, President, Rotary Club Jalandhar