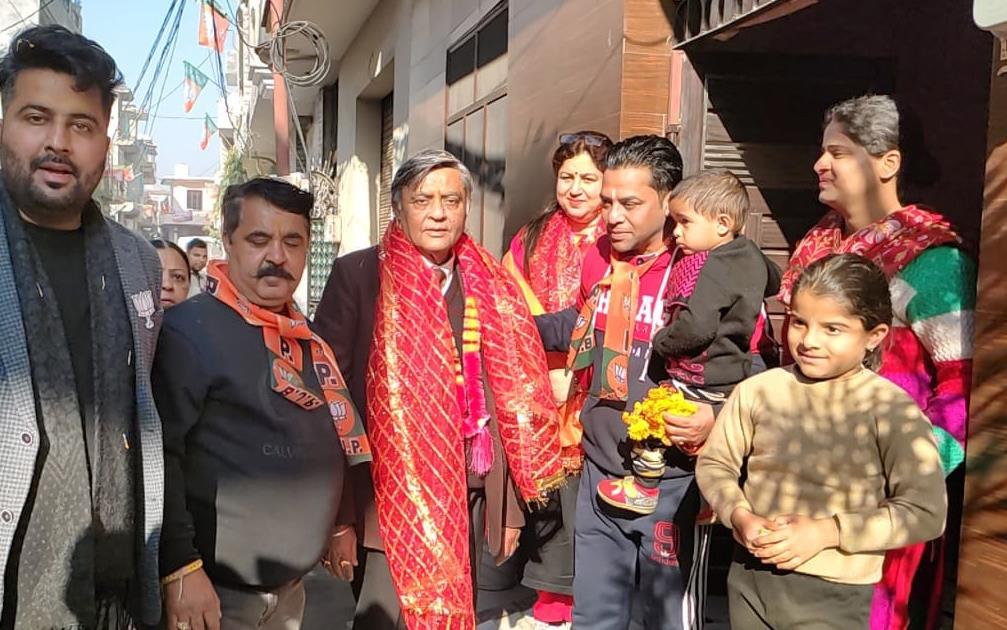 Veteran BJP leader and former Cabinet minister Manoranjan Kalia, who is contesting the Assembly election from the Jalandhar Central seat for the third consecutive time, loves to interact with people on the doorstep, so he is spending most of his time visiting them door to door.

Kalia, who is a lawyer by profession, is keeping his poll campaign unfussy and limited. Accompanied by a small group of volunteers, he starts visiting residential areas in the constituency from 8 in the morning. Keeping a very different style from other politicians, he, in his soft spoken tone, asks residents to cast their vote in support of him. He also meets youngsters and seeks suggestions from them on various issues hampering the state’s growth and development.

A volunteer from Kalia’s team says he has been canvassing from door to door for nearly two to three hours for the past few days, but as the poll is drawing near, canvassing time has been extended up to five to six hours. He says his team divides areas in two parts, while eight to 10 areas are visited by Kalia and his volunteers and the remaining are covered by his two sisters and women members of the BJP Mahila Morcha.

Manik, a first-time voter of Guru Nanak Pura (East), who was desperately waiting for Manoranjan Kalia to visit his locality this afternoon, said his father had told him that it was Kalia who brought major development projects — the approval of two railway over-bridges and a flyover during his tenure — to the constituency in the past.

Asked what issue he wanted to take up with Manoranjan Kalia, he said his locality had been getting a contaminated water supply over the past few months. Besides, the roads were in a poor condition, so he wanted to discuss the same with him.

Talking to The Tribune, Manoranjan Kalia said, “Even though the technology has advanced, social media is ruling the campaigning world, but the door-to-door interactions are irreplaceable. By meeting voters personally, you get to know the ground reality and your actual position in their eyes,” he said, adding that he was making use of both traditional media and new media to connect to the voters.

“This morning when I visited Sangat Singh Nagar, residents complained about poor living conditions. He said every second locality he visited had been dug up or had broken roads and garbage scattered here and there. The residents complained how the incumbent MLA is not approachable and their issues remain unaddressed,” he said.

Meanwhile, Kalia, who has won from the seat in 1985, 1997, 2007 and 2012, is known for his fiery speeches and throwing salvos at his political adversaries. Addressing local residents at Guru Nanak Pura, Kalia said he needed no introduction as his past work speaks for him. Training guns at MLA Beri, he promised voters to address their long-pending demands of traffic congestion, roads and streamlining garbage disposal.

He asked residents to participate in PM Modi’s rally on Monday in large numbers as it would change the political atmosphere in the state. He said Modi had a great vision for Punjab and under his leadership, the state would touch new heights of development.