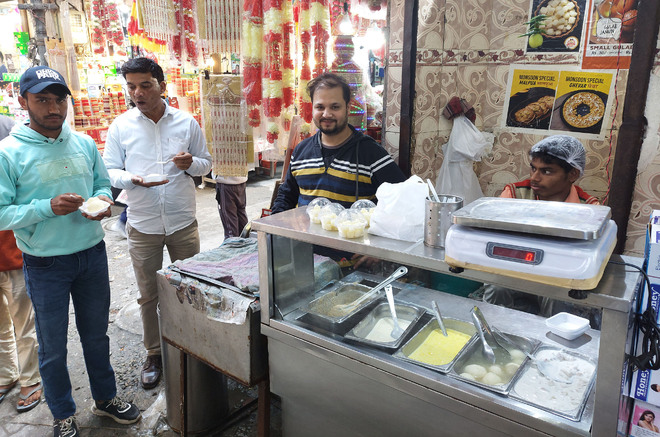 Like most youngsters who migrate abroad in search of a better lifestyle, Harsh Batla (32) also took the same path and moved to Australia in 2008. He wanted to be a chef, hence took admission in a hospitality course. However, destiny had something else in store. From rebranding his inherited business to expanding it, Harsh has now become the man behind the popular ‘Kulfi Wala Chowk’ located in Rainak bazaar here.

Life turned upside down after the sudden demise of his father in 2011. He had to return home, bidding adieu to his dreams in Australia. But this didn’t deter him. Carrying forward the legacy of his grandfather, he took over the dwindling business of selling kulfi.

“I still remember the first day when I entered our shop located centrally at a corner on the intersection of four roads. Owing to the scrumptious kulfi, rabdi, fruit cream and milkshakes, my grandfather had already set a benchmark. After he started his venture in 1955, the area came to be known after his shop. I was 23 and completely naive, yet I had to maintain the standards. As I believe the taste was there in my hands, it was passed on to me by father and grandfather. I started following their recipe and developed the similar taste. The crowd started gathering again,” Harsh told.

With the help of his younger brother, Gaurav Batla, he managed to revive the same old aura of the shop. Initially, from cooking to washing utensils, both had to do everything on own. “Subsequently, with the help of regained popularity, we hired workers for our business. While my brother now sits at our factory and takes care of the cooking part of the desserts, I take care of the customers and sale,” he said.

Though starting from scratch was tough for Batla brothers, but they didn’t compromise with the taste of kulfi and rabdi that had been wooing their patrons for decades.

The chowk is now named as Billa Kulfi Wala, which has become a landmark address. It could be seen as a landmark in many visiting cards. Apart from the original items that his grandfather and father used to sell, with time Harsh has also introduced more items in the menu. “My father was popularly known as Billa…so we took the name to do the rebranding of the shop. Earlier, the shop used to open on Sundays only, but now we keep it opened throughout the week. The home delivery services by food apps also helped us grow,” Harsh shared.

As kulfi corner is still in existence, he has opened another shop, adjacent to it to sell more items. From stick kulfi to fruit cream, now ras malai, ghevar, rasgulla, Bengali chana murki are also served.