Docs assured of formal apology by Rajan Angural in 72 hours 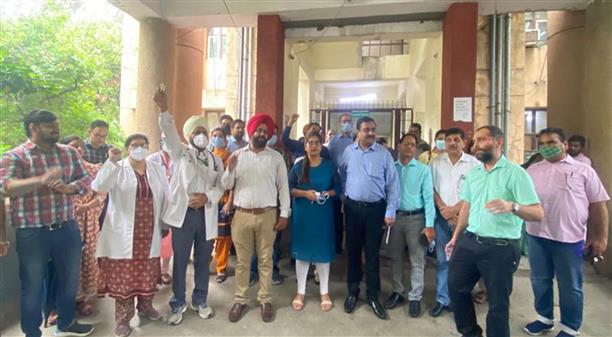 A day after vandalism at the Civil Hospital reportedly by MLA Sheetal Angural’s brother Rajan Angural and his supporters, MLA Raman Arora tendered an apology to doctors on behalf of Rajan Angural.

However, the PCMS Association (PCMSA) in Jalandhar reiterated its stance seeking an FIR against “miscreants” who vandalised the hospital premises on Monday. Doctors sought an FIR against Rajan and a written apology from him, even after MLA Raman Arora’s apology to doctors.

They further declared that if a written apology isn’t received until Tuesday they will shut down all medical services in the district.

In response to the PCMSA Jalandhar’s stance on the issue, MLA Raman Arora has sought 72 hours providing assurance that Rajan Angural will personally apologise to Dr Harveen by visiting the hospital on Tuesday morning.

MLA Raman Arora held a meeting with doctors at the office of the MS Civil Hospital, Jalandhar and doctors impacted by yesterday’s incidents.

The meeting was attended by MS Rajeev Sharma, Jalandhar, AAP MLA Raman Arora, Dr Harveen Kaur, the doctor on duty when Angural’s supporters entered the hospital yesterday, and PCMSA, Jalandhar unit, lead by Dr Vaninder Riar. MLA Raman Arora tendered apology on behalf of the miscreants and urged the affected doctor and the PCMSA to withdraw their complaint.

Earlier, the doctors started the day with protests at the Civil Hospital, but these were called off for the time being, after Arora’s apology.

Emergency Medical Officer Dr Harveen Kaur said, “Around 20 to 50 people barged into the emergency on the night of September 21 and sought medico legal reports (MLRs) to be filed by us. I was threatened that I would be suspended by morning if I don’t comply. The main threats were made by Rajan Angural. But we stuck to the procedure and requisite MLRs of four people were filed. The doors of the minor OT were also broken and property vandalised. Both the doctors and medical superintendent have made a formal complaint with the police.”

A complaint was submitted at the police station 4.