Breaks into celebration upon their arrival 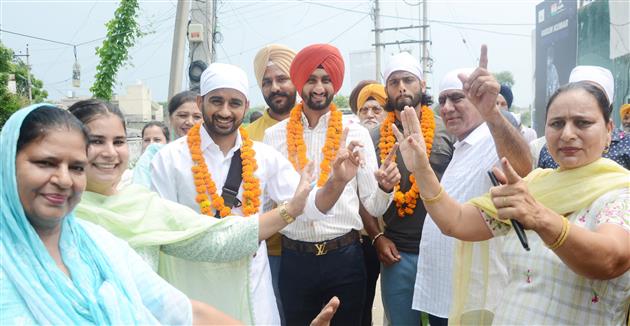 Beats of dhol, bhangra, tears of joy, and what not! It was a day of celebrations for the parents of Indian men’s hockey team captain Manpreet Singh and players Varun Kumar and Mandeep Singh. Everyone in Mithapur broke into a dance the moment the players entered the village. Residents garlanded the trio and got pictures clicked with them. A ‘path’ was organised for the players.

Mithapur village has sent three players to the men’s hockey team, who, for two consecutive years, have proved their mettle at prestigious platforms. Last year, Indian hockey team won a bronze at the Tokyo Olympics and this year, a silver at the Commonwealth games.

It was a special win for the captain as his wife and daughter welcomed him. Recalling Manpreet’s childhood days, when the captain would devote most of his time to hockey, his mother had earlier said she would always wonder what he (Manpreet) would do once he grew up. “But the coaches training him would tell me I would one day watch him play on the TV. The day is here. What else could I have asked for!” the mother had shared.

Today Manpreet said, “Now our focus will be on winning the gold next time.” Varun Kumar’s father Brahma Nand said a special meal would be prepared for Varun as he had come home after long.

“He is here for 10-15 days and we will make the most of it,” he said, adding, “Varun’s hard work has finally paid off. I had never expected such a day would ever come.” Mandeep said he was thankful to the villagers for giving them such a warm welcome. “I am proud of the team’s achievement. I want to express my gratitude to the Mithapur residents too for always showering such love on us,” he said. Jalandhar Cantt MLA Pargat Singh also congratulated the players and honoured them.