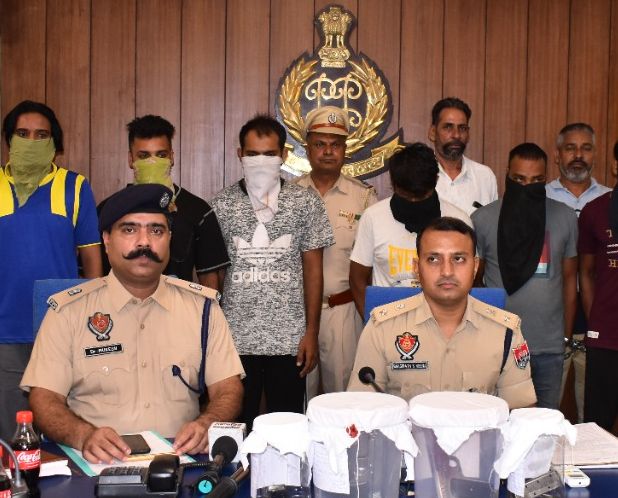 Cops with the accused in Nawanshahr on Sunday. Tribune photo

The Nawanshahr police have arrested seven accused (all in their 20s) during a special nakabandi and recovered two pistols, four magazines, ammunition, one scooter and motorcycle each from their possession. As per the information, the weapons recovered were brought from Jalandhar.

The police claimed that the accused were planning to kill the main witness Gopi Nijjar in gangster Sukha Kahlwa’s murder case. SSP Bhagirath Meena, addressing a press conference said there was a tip-off that some miscreants were planning to kill a person. “So, a special naka was laid and police personnel noticed three men coming by scooter and four by motorcycle. They all were nabbed on the spot. The accused face several cases, which have been registered against them in different police stations,” the SSP informed.

A case under Sections 302, 120-B of the IPC and 25 under the Arms Act has been registered against the seven accused. All of the accused are sent on three- day police remand.