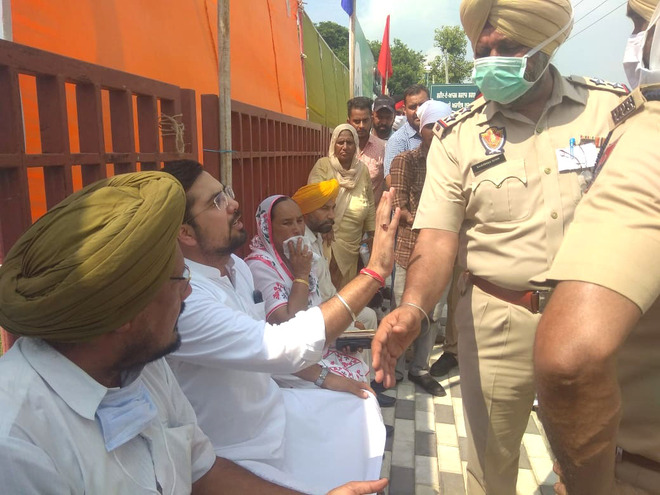 Less than two weeks after, a face-off between Nawanshahr MLA Angad Singh and SSP Harmanbir Gill was once again witnessed here on Tuesday. The MLA sat on a dharna in protest against alleged beefed-up security arrangements just to cause inconvenience to them during the visit of CM Charanjit Singh Channi for the birth anniversary programme of Bhagat Singh at his ancestral Khatkar Kalan village.

Angad Singh reportedly turned up nearly half an hour before the CM’s visit. He said, “As soon as I was about to enter the museum gates, I saw about 15 elected representatives, including MC members, Block Samiti chairmen, Zila Parishad chairmen and others from Banga, Balachaur and Nawanshahr, standing outside the gate.

“I asked them why they were not going inside, to which they replied that they were not allowed to enter. I beseeched for them, but the security personnel said that I could enter but others could not as per the orders from their seniors. I then decided to sit on a protest on a raised platform and chose not to go inside till they all are taken in.”

He made his point, “I have already got many chances to meet the CM. More than me, it is important for these local leaders to catch up with the CM. I also felt that the Congress workers were being deliberately harassed at the behest of the SSP.”

An SP was later sent to pacify the MLA, but he remained adamant saying that he would only follow the 15 Congress leaders barred from entering today. Later, Amarinder Singh Raja Warring came out to inquire about the matter. He ordered the security personnel to let everyone in. It was then that finally Angad came in.

Asked about the matter, SSP Harmanbir Gill said he was not aware of the MLA’s dharna. He, however, later clarified, “We had told all MLAs to bring along just four persons at the function and had given the same directions to our security. But I am told that he came along with more than the required number, so my staff objected. It was a routine security matter.”