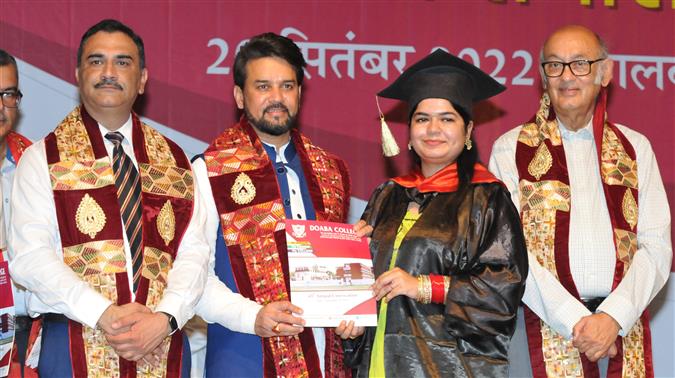 The 65th Convocation of Doaba College was organised on Tuesday. Union Minister Anurag Singh Thakur, who is also an alumnus of the institute, graced the occasion as the Chief Guest.

On the sidelines of the function, Union Minister Anurag Thakur was asked about total lack of facilities for cricket at the Burlton Park where he used to play in his college days. He was also quizzed about no facilities coming for promoting hockey in Mithapur, the village from where three Olympians arose. Thakur replied to both the questions saying, “Sports is a state’s subject matter. Developing sports infrastructure is the duty of the state government.

Taking a round of the college, Thakur said, “Coming here gives me a feeling which cannot be described in words.” In his speech, he noted, “India has entered the era of women empowerment which is very well-exemplified by the fact that women are ahead in sports, academics and other fields. This is the picture of the ‘New India’.”

Thakur said the Government of India had come up with the New Education Policy 2020 to give impetus to sports education and regional languages. He said the Central Government was fully focussed on providing more job opportunities to the youth of the country through the Skill India Development Programme. He stated it was very important to save the youth of the country from brain-drain.

Principal (Dr) Pardeep Bhandari welcomed the minister by noting his long association with the college. “Thakur did his BA in 1994 and MA in Political Science in 1996 from this college. Even at that time, he used to bring us laurels in the field of cricket, social work and politics with his consistent hard work.”

Presiding over the function, the president of the management committee, Chander Mohan, said, “The whole Doaba College fraternity is proud of our alumnus Anurag Thakur, who has carved a niche for himself. He is now source of inspiration to numerous students.”

The college gave away a silver plaque to Thakur. Members of the management of the college- Chander Mohan, Dhruv Mittal, Ashim Sondhi, Dr Sushma Chawla and Principal (Dr) Pardeep Bhandari presented degrees to a total of 552 students of the sessions 2017-18, 2018-19 and 2019-20. Out of these, 372 were undergraduates and 180 were postgraduates. SDM (Dr) Jai Inder Singh, BJP leaders Manoranjan Kalia, KD Bhandari, Sushil Sharma and Sarabjit Singh Makkar were the guests of honour.