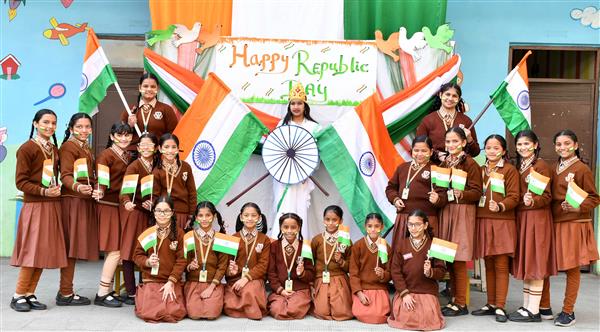 Republic Day celebrations at a school on Monday.

Jalandhar: Eklavya School celebrated the birth anniversary of Subhash Chandra Bose. The chairman of the school, JK Gupta, said that it was very important to teach the children about the contributions of such great personalities. Director Seema Handa said such kind of days should be observed. Educator Shilpa Kapoor delivered a lecture on the life of Bose on the occasion. A fancy dress competition was held in which students dressed as freedom fighter. Debate and declamation competitions were held for the students of senior wing.

Anchal Sharma of DIPS School has made her place in the national games by winning a gold medal in the state-level PAP indoor stadium games. Principal Monika Sachdeva said Anchal studying in Class VI had won the medal in Taekwondo. Coach Vishal Sharma trained Anchal for the games. Next month she will go to Hyderabad, Telangana for the National Games. Principal Monika Sachdeva congratulated Anchal and Coach Vishal Sharma for this victory and wished them all the best for the upcoming competition. MD Tarwinder Singh said it was a matter of great pride that the children were bringing laurels by playing at the national level. CEO Monika Mandotra said the management always tried to provide every facility to the children.

Kanya Maha Vidyalaya principal Atima Sharma Dwivedi congratulated Tarandeep Kaur, assistant professor, Post Graduate Department of Fashion Designing, for completing a certificate course in Visual Merchandising from Dubai. Recognised by The Knowledge and Human Development Authority, Government of United Arab Emirates, this course was organised by Fad Institute of Luxury Fashion and Style in which 17 selected participants from different countries of the world participated. During this course, where Tarandeep learned in detail about the definition and importance of visual merchandising, at the same time, in the field of fashion designing, she practically understood the process of attracting customers to purchase goods by encouraging them.

The NSS units of Lyallpur Khalsa College have made another record when its four NSS volunteers represented the state at National Youth Festival from January 12 to 16 at Hubli, Karnataka. Principal Gurpinder Singh Samra congratulated the volunteers for this achievement. He advised the volunteers to share their experiences of this national event with other volunteers and motivate others to take legacy of national-level participation of LKC NSS volunters forward. NSS programme officer Satpal Singh said this event was being organised by the Ministry of Youth Affairs and Sports, Government of India, every year. He added that it was a record that four NSS volunteers of the same college in Punjab represented state at this grand event. NSS volunteers Sakshi Sharma, Maninderjit Singh, Jaskaran Gadhra and Sapna attended this event.

National Girl Child Day was celebrated by St Soldier Group of Institutions under the guidance of chairperson Sangeeta Chopra. On the occasion, students through different quotes and slogans conveyed the message to save the girl child. The highlight of this activity was the chalkboard drawing in which the kindergarten students did different poses and gave beautiful messages on “Save Girl Child”.

Kanya Maha Vidyalaya proved its excellence by performing well in the 26th National Youth Festival organised by Ministry of Youth Affairs, Government of India held at Karnataka. KMV team performed Giddha and Luddi in this festival and their performance was much appreciated by all the judges of the competition. It is important to mention that the giddha team of KMV has been bagging top positions at the zonal and state-level youth festivals also from the past many years. Team members said they had been able to compete at national and international-level competitions only due to the mentoring and guidance provided to them by principal Atima Sharma Dwivedi and the faculty members of KMV. The principal congratulated Gurjot, Dean, and Geetika for their whole hearted and committed dedication towards the preparation of the item and hoped that they would continue their winning streak in the future also.

Hans Raj Mahila Maha Vidyalaya inaugurated various competitions for celebrating National Voters’ Day in collaboration with Deputy Commissioner-cum-District Election Officer under the guidance of principal Ajay Sareen. Students from different colleges of the district would participate in these competitions. The topic for the competitions is “Voters awareness and participation in the election in India”. Under this category, essay writing and speech competition was conducted. Rangoli and poster making, nukkad natak, skit and voters’ awareness rally would also be held. The results of these competitions will be declared on January 25 on the occasion of National Voters’ Day.

Following in his father’s footsteps to join the Defence Forces, Sujal Jaswal, an NCC Cadet of Emm Aar International School, Adampur has made it to the prestigious Rashtriya Military School, Chail. Sujal showed a stellar performance in the entrance examination and is now set to take up his career to new heights.