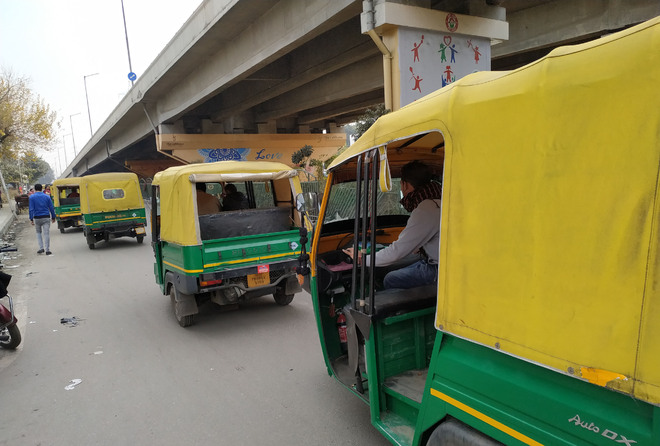 Auto-rickshaw drivers have been struggling to get a regular supply of CNG for the last two years. Tribune Photo: Malkiat Singh

Despite the fact that CNG auto-rickshaw drivers in the district were assured in September that new such stations would come up in the city by November 15, no step has so far been taken by the administration in this regard. The absence of CNG filling stations is costing dear to auto-rickshaw drivers.

There were also apprehensions earlier this month that filling stations would be opened in the district after Adani Gas Ltd reportedly signed an agreement to take over the supply chain of CNG from Jay Madhok company.

However, at present there is not any CNG filling station in Jalandhar, as a result of which the auto-rickshaw drivers have to travel as far as 20-30 kilometres to get their vehicles re-filled. To reduce pollution, the Punjab Pollution Control Board (PPCB) had issued strict guidelines in July 2018 that no new auto-rickshaws running on petrol and diesel would be allowed in the district and only CNG, LPG or electric autos would be registered. Besides, for the easy availability of CNG, the PPCB had assured that new CNG stations would be set up in every district. Though over two years have elapsed, drivers are still struggling to get a regular supply of CNG.

The authorities have always put auto-rickshaw drivers at the receiving end. For getting the eco-friendly fuel, they have to spend extra amount by travelling to far-off filling stations in areas such as Kartarpur, Phagwara and Nakodar. —Ranjit Singh, President, Bhagat Singh Auto-rickshaw Union

After Jay Madhok was issued a show-cause notice by the Petroleum and Natural Gas Regulatory Board (PNGRB) over defaulting on timelines and alleged irregularities in the acquisition of the licence for selling gas in the city, the supply of CNG has been hit since.

Gurinder Singh, a CNG auto-rickshaw driver, said due to the non-availability of the required number of CNG stations, they had to limit their commuting routes and their daily wages had also decreased due to the unavailability of the desired amount of fuel. Moreover, CNG fuel was available for only five days in a week.

The dealers of the fuel are also reportedly suffering losses. Meanwhile, Sub-Divisional Magistrate (SDM) Jai Inder Singh denied having any official confirmation that the Adani group would take over the acquisition of CNG supply here, dashing the hopes of opening of new CNG stations in the coming days.