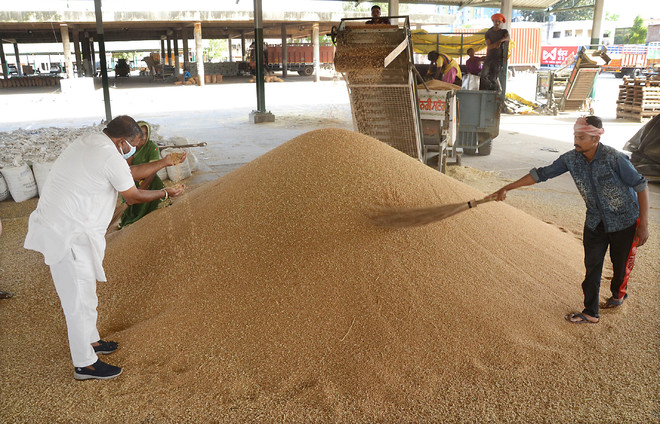 A Farmer check the quality of his wheat.

Harvested wheat crop arrived at various grain markets of the district but remained unlifted on the first day of procurement.

Reason: The arhtiyas (commission agents) went ahead with their state-wide protest against the state government’s decision to follow the Centre’s direction of transferring the minimum support price (MSP) of farmers’ crops directly to their bank accounts. Hence, farmers returned to their villages without procurement.

Farmers started thronging the grain markets from 8 am onwards on Saturday hoping to sell their produce early, but the deadlock between the government and the arthiyas left them at the receiving end. On the first day, the crop was only cleaned and packed into gunny bags.

Balwinder Singh (32), a farmer who had come from Budhiana in Jandu Singha, said he arrived at the grain market to avoid any damage to his crop. “Two days ago, around 18 acres of standing wheat crop was gutted in a fire incident at our village. Due to short-circuit of overhead high-tension electricity wires, the phenomenon of the burning of ready to harvest crop is common. Therefore, we try to harvest our crop as soon as possible. The non-clarity over the timely transfer of MSP into our bank accounts has apparently forced arthiyas to go on strike,” Balwinder, who brought around 300 quintals of wheat for procurement to the grain market, said.

Likewise, Davinder Singh from Gakhhal village, said it’s been three hours since he had been sitting at the grain market. “Earlier, the procurement used to be concluded within two hours after reaching the mandis. It’s hard to understand why the government is adamant on DBT, when commission agents also transfer us the MSP directly into our accounts within a few days of procurement,” Davinder said.

Farmers also have added pressure these days due to the agri-laws’ stir. Those who couldn’t join the stir on the Delhi-Haryana borders are reaping the fields of their relatives, gradually delaying the harvesting process.

“We have no issues over the direct transfer of crop’s price into the bank accounts of farmers, but the government procurement agencies need to clear the air over a stipulated time period of transfer of money. The farmers most of the time take advance money from us, which wouldn’t be possible with the interference of the government agencies. In addition, the shortage of staff and maintaining the record of the crop arrived in the mandis will only delay the transfer of money into the bank accounts of farmers,” said Kashmiri Lal, an arhtiya. He informed that the strike was called off later in the evening and the procurement would begin from tomorrow onwards.

What Role they play in grain markets

Apart from collecting the crop from farmers, arhtiyas provide labour, gunny bags, loading and unloading of crops and loan to farmers. They also maintain the record of the exact amount of crop brought in the market, which is usually done manually. For the past two years, they have also been paying farmers through digital modes. Heavy fans which cost around Rs70,000 to Rs80,000 are provided to farmers by the arthiyas.