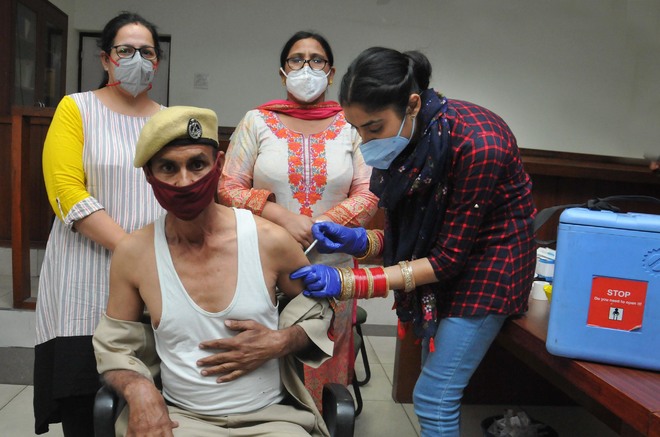 A Covid vaccination camp in progress at the DC office in Jalandhar.

The district on Tuesday reported deaths of six persons due to Covid-19, pushing the toll to 957. Besides, the district witnessed 307 fresh cases. As many as 219 patients lost their lives in March alone and in the first week of April, 43 fatalities were reported.

In addition, the caseload of active cases has touched 3,124. As part of the intensified RT-PCR testing drive, over 7,87,960 samples were collected from the district, out of which 71,418 people have tested positive and 7,16,542 samples tested negative.

This year, after the arrival of the second wave of Covid-19, maximum number of cases were reported in March. The case count reached 3,609 from 527 on March 31.

As per the data received from the Civil Hospital, approximately 60 patients are admitted in the hospital.

While presiding over a meeting with over 40 such NGOs at the District Administrative Complex, the Deputy Commissioner accompanied by renowned environmentalist Sant Balbir Singh Seechewal said that in the present scenario, the vaccination of maximum people was the only key to diminish the rapid spread of the virus. He said the NGOs, being an integral part of our society, could play a constructive role to ensure maximum immunisation by transforming the vaccination drive into a mass movement in Jalandhar.

During the meeting, a WhatsApp group — civil society — was formed and all representatives of society were added in it. He shared two WhatsApp numbers 9888981881 and 9501799068 along with a form, which can be duly filled in by the NGOs and posted in the group so that a mobile vaccination camp for people above 45 could be arranged for them. He said volunteers of the NGOs were connected with thousands of people at the grassroots, who could create awareness among masses to come forward in huge numbers for the vaccination. He also appealed to NGOs to leave no stone unturned to ensure that every eligible resident (above 45) was immunised.