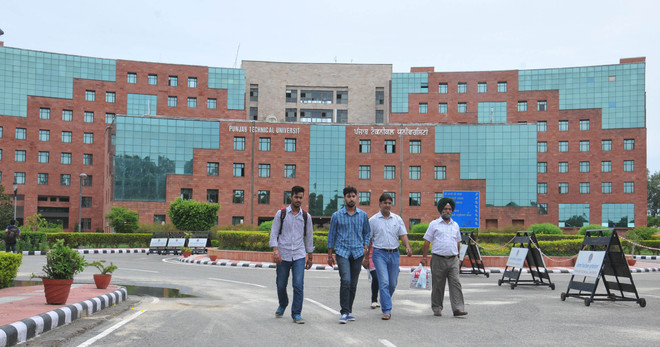 Choosing not to wait for the results of the JEE postponed to next month due to rising cases of the Covid-19 pandemic, the state Technical Education Department has given a go-ahead to IK Gujral Punjab Technical University to start centralised admissions to BTech for this year on the basis of the Class XII exam results.

A notification in this regard has finally been issued for holding admissions to the colleges affiliated with IKGPTU, Maharaja Ranjit Singh Punjab Technical University and Punjab Agricultural University. A notification issued by Anurag Verma, Principal Secretary, Department of Technical Education, reads, “All those candidates who have passed Plus Two examination from a board recognised by the Centre/state government with physics and mathematics as compulsory subjects will be able to take admission.”

The IKGPTU will also take admissions to BPharmacy in 39 colleges of the state without any entrance tests. However, admission in B Architecture will be conducted on the basis of the aptitude test in architecture conducted by the Council of Architecture.

Officials of the department took a decision as all private universities, including Lovely Professional University, Chandigarh University and Chitkara University and even Thapar University, had decided to go with Plus Two results for B Tech admission. This had worried the managements of colleges affiliated with the state universities as they felt that by the time their admissions would start, a majority of the students would have already clinched a seat elsewhere.

Dr Anshu Kataria, president, Punjab Unaided Colleges Association, and chairman of Aryans Group of Colleges, has hailed the decision of the state government to forego JEE results for B Tech admission.

Would have led to holding up of admissions

The JEE Mains had been put off between September 1 and 6 and JEE Advanced on September 27. This would have led to holding up of admissions to BTech in Punjab colleges till October. All private universities of the state had already been taking admissions since July and had enrolled thousands of students, whereas colleges affiliated with state-run universities could not conduct admissions. This would have led to a major downfall in admissions in engineering colleges of the state, which had already been suffering huge losses on account of less admissions in the past few years. A committee comprising Vice-Chancellors of IKGPTU, Kapurthala, and MRSPTU, Bathinda, had been formed by the Technical Education Department to take a final call on the matter. The VCs recommended taking admissions on the basis of Class XII merit. The dept officials accepted the recommendations and issued a notification.