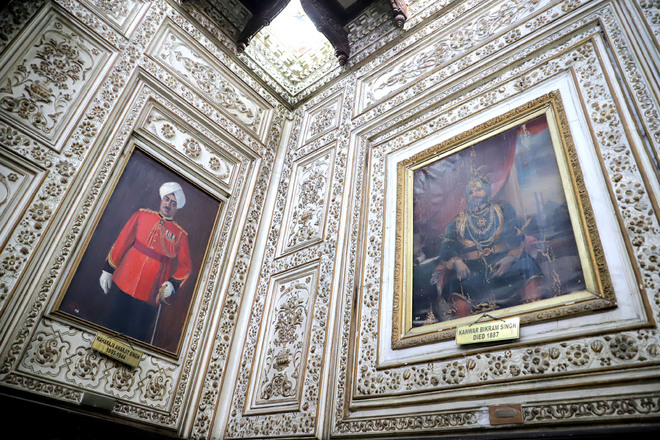 Portraits of erstwhile kings of Kapurthala, Maharaja Amarjeet Singh (L) and Kanwar Bikram Singh, on the high walls of the Darbar Hall.

Housed in a palatial building of the erstwhile Maharaja of Kapurthala, Sainik School, Kapurthala, was inaugurated on July 8, 1961, by the then Defence Minister VK Krishna Menon with the objective of preparing boys academically, physically and mentally to join the NDA.

Named Jagatjit Palace, the structure was built in 1908 on the pattern of Versailles built by Louis XIV of France.

Already housing 630 students from Punjab, Bihar, Ladakh and other states, the school is spread on a sprawling campus of nearly 200 acres. It is a fully residential school for boys providing public school education. It offers an array of opportunities to channel the energies of cadets for constructive purposes. A wide spectrum of extra-curricular activities ensures their multitudinous personality development. The school has been rendering yeoman service to the nation for over four decades by imparting balanced and quality education to cadets hailing from all strata of society. It has produced over 700 officers for the Indian armed forces through National Defence Academy. A sizeable number

of its alumni has made their mark in other respectable professions too! It is the only school among the 20 Sainik Schools that holds the record of holding the Defence Minister’s trophy continuously for seven years.

Principal Col Prashant Saxena said: “The National Testing Agency will hold All-India Sainik Schools Entrance Examination (AISSEE)-2021 on January 10. The process of filling admission forms, which is currently on, will end on December 3. In Punjab, the exam will be conducted in Kapurthala, Amritsar, Ludhiana, Patiala and Faridkot.”

Alumni who made their mark