rue govt’s indifference to their demands 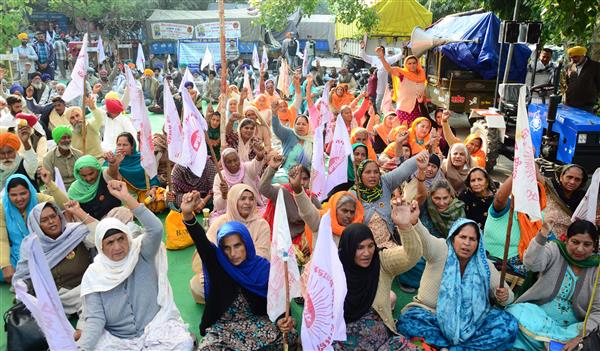 Women participate in the farmers’ protest at the District Administrative Complex in Jalandhar on Thursday. Photo: Sarabjit Singh

As the farmers’ indefinite protest against the state government inside the District Administrative Complex (DAC), here, entered sixth day on Thursday, a large number of women from across the Doaba region staged a massive protest in support of farmers, and accused the Bhagwant Mann-led AAP government for their ‘anti-farmer’ attitude.

Sukhwinder Singh Sabhra, state convener, Kisan Mazdoor Sangharsh Committee, and Salwinder Singh Janian, district president, said farmers’ indefinite protest at the DC office across the state had entered the sixth day today, but no representative of the government had come to them so far to take up their issues. They said the government, which was pretending to be people’s own government, had lathi-charged farm labourers who were protesting outside the Chief Minister’s residence in Sangrur.

“By letting the police use force to disperse farmers, the government has violated the basic rights of the people to protest and insulted democracy,” they said, adding the government must fulfil the promises it made during the anti-farm law agitation and in the election manifesto.

Addressing the gathering, women leaders encouraged the youth and women to stand shoulder to shoulder with the farmers. They said today they had held a massive protest in support of the farmers, if needed they, too, would stay put at the protest.

The women leaders said the demands of farmers, including implementation of the Swaminathan report, compensation for handling paddy straw, stopping auction of panchayat land with cultivators, cancellation of FIRs registered against farmers for burning stubble, land acquisition for highways at four times the market rate, provision of better canal system and rejection of pre-paid power meter system, must be fulfilled. Besides, the corporate houses responsible for polluting the water should be severely punished.

They said if the government failed to fulfil the demands of the farmers, they would intensify the protest in the coming days.