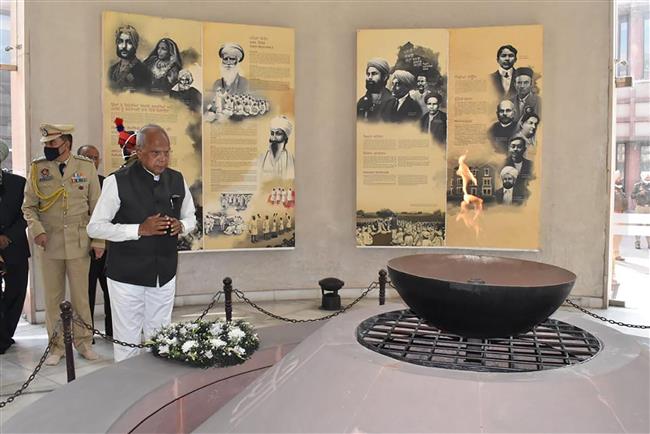 Punjab Governor Banwari Lal Purohit lays a wreath before the Flame of Freedom at Minar-e-Shaheedan during his visit to the Jang-e-Azadi Memorial at Kartarpur. Tribune photo

On his maiden trip to the city since his appointment, the Governor’s first stopover of the day was at the memorial. Accompanied by officials, he laid a wreath in front of the Flame of Freedom set up inside the Minar-e-Shaheedan in the central part of the building. He spent over an hour at the memorial, where he took a round of the various galleries showcasing the freedom struggle and role played by Punjabis to get the country liberated from the British rule.

He also keenly watched a short film displaying the hardships faced by the Indians, especially Punjabis in the freedom struggle. The Governor also described the memorial as one of the architectural monument, which would ever inspire the young generations towards the spirit of nationalism and patriotism besides emulating the message of freedom struggle amongst them. He said the memorial was a befitting tribute to the great freedom fighters and martyrs, who sacrificed their lives for the sake of country’s liberation from British colonialism.

The Governor also paid obeisance at Shri Devi Talab Mandir, where he was welcomed by the management committee. He was also presented a siropa (robe of honour) by the members of management. Commissioner of Police Naunihal Singh, Principal Secretary J.R. Balamurgan, president of the management committee Shital Vij took him around the temple premises. Meanwhile, the members of the committee apprised the Governor about the historic significance of this place as it is one of the Shakti Peeths in north India.

In Jalandhar, a contingent of Punjab Police and PAP band presented the guard of honour to the Governor. He took lunch at the complex and pushed off for IK Gujral Punjab Technical University campus in Kapurthala. Holding a meeting with the district administrative and police officials, he exhorted them to use the powers conferred on them by the Constitution by upholding the values of ethics.

He also stressed on the best use of the existing resources of the Central and state governments. Apart from getting information about the economic, geographical and social aspects of the district, the Governor also took a review of the functioning of IKGPTU.