On Lohri, cops show some warmth 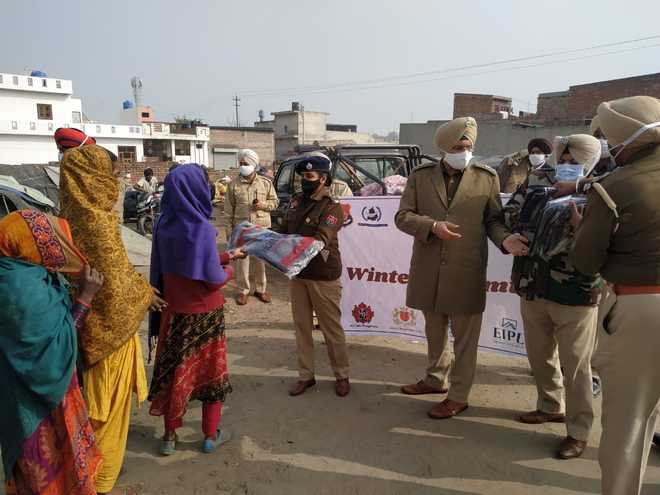 The Saanjh and Women and Child Protection Unit of Jalandhar Commissionerate celebrated Lohri with the underprivileged kids at Sanjay Gandhi Nagar, Jalandhar.

Over 200 kids from the economically weaker section of society participated in the celebrations. Under Project Winter Warmth, blankets, school bags, groundnut, popcorns were shared with kids.

Ishaant Gupta from Himco Charitable Trust and Dr Vandana from Ushayaan contributed in providing Lohri goodies to kids. Ritu Kochhar of Pranic Healing Foundation made the kids aware about child abuse and asked them to raise their voice if they face it.

Saanjh, the community outreach arm of the Punjab Police, on Wednesday launched Project ‘Winter Warmth’ at Kapurthala. The Kapurthala police distributed 900 blankets to poor and needy families on the occasion of Lohri in the sub-divisions of Phagwara, Bholath, Sultanpur Lodhi and Kaputhala.

The project has been initiated by ADGP, head of Community Affairs Division, Saanjh, Gurpreet Deo. Project Winter Warmth is an initiative to reach out to the poorest of poor and provide them some warmth and solace during the harsh winter conditions. Saanjh, assisted by Punjab CSR authority, reached out to leading companies of Punjab and solicited their help and support. Many corporates have stepped forward to lend a helping hand in this noble initiative.

Senior Superintendent of Police, Kapurthala, Kanwardeep Kaur along with other officers launched the project in Kapurthala.

Corporates of Kapurthala district, mainly JCT Mill Phagwara, EIPL Phagwara, Starch Mill Phagwara and Jagatjeet Mill Hamira Kapurthala contributed liberally towards the project. The SSP said: “The Punjab Police have proved its devotion to its citizen through their exemplary services in the worst time of the pandemic. The Winter Warmth project is just another small initiative to fill the gap between the police and common people.”