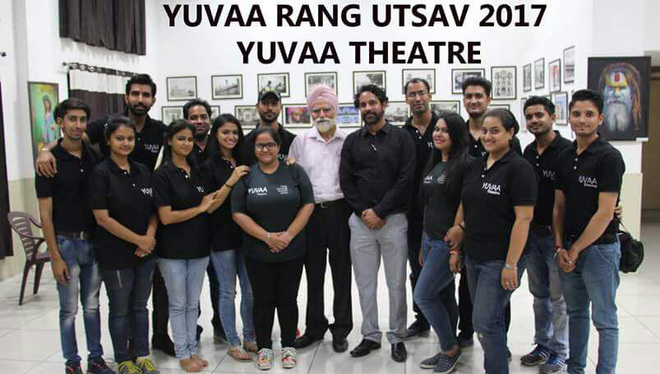 once upon a time Team Yuva at the Saigal Memorial Hall in 2017 during a theatre festival. file

The lights at the posh, air-conditioned and glazed-floored auditoriums in the city have remained off for months. There are no dhol beats, no strains of mellifluous stringed instruments or soothing vocals, no concerts and no one around the ticket windows — all due to the pandemic.

Earlier, artistes generated a parallel economy which kept people entertained and auditoriums packed to capacity. A pre-pandemic artistes’ revolution in the district brought lucrative dividends for budding talents and revived businesses of some ignored auditoriums which lay silent for years due to lack of events. From the Virsa Vihar to the Saigal Memorial hall, many places saw a revamp in recent years, thanks to a renewed artistic excitement.

Sad to say, all that has fallen silent during the pandemic.

Theatrist and actor Ankur Sharma, who has been staging plays and hosting national festivals in Jalandhar, had to cancel two of his festivals during the pandemic. One for which liaisons had already taken place with national teams. His efforts earned theatre its first commercial audience. He hosted the first paid theatre shows in Jalandhar.

His group Yuva’s stage play scheduled for World Theatre Day (March 27) this year had to be cancelled due to the pandemic. With Repertoire Grants from the government also hit, the group which had over 15 team members before the pandemic, is now left with four.

“We were unable to host our Yuva Rang Utsav and the national theatre festival this year. The Repertoire Grants which we receive for artiste support could not be received because the national team was unable to come for inspection. Our rehearsals at local auditoriums have stopped, 20 people are allowed at weddings. But for us 20 people are involved in organising a play only. How can we host audiences,” says Ankur.

A professor who pursues theatre as a passion, Ankur says with colleges unable to pay salaries for months, the suspension of theatre activity was a double whammy.

Music director Jassi Katyal aka Jay K, who has given music in over 25 Punjabi films, says, “The pandemic has led to suspension of shoots. If there are no shoots, there are no films and there is no work for us. Hardly any film is being made these days. Prices have also been greatly reduced. We are paid much less since everyone claims there is a financial crunch. There are a host of support artistes and folk performers who have lost their only means of earning. These are very hard times for the industry.”

Sixty-year-old ex-serviceman Manjit Singh, a retired Naik from the Indian Army, is popularly known as Baba Chimteyan Wala for his sterling bhangra performances with many famous singers. He has performed with the likes of Kanwar Grewal, Babbu Mann, Ranjit Bawa, Sunanda Sharma and Kaur B, but the pandemic has created problems for them. During the pandemic, he is relegated to his village as there are no shows or melas which acted as a major push for artistes during the season.

“Our work has been greatly affected. This used to be a season of melas. People rained notes on us. Now, I sit at my ancestral village near Adampur. I sweep my home and cook food myself and feed three to four dogs. The government recently gave relaxations to certain essential commodities. Artistes need relaxation too. There is no means of subsistence. I had a habit of staying busy. The pandemic has taken a toll on my health. One may dance or work, but the magic of getting on stage increases an artiste’s life-span.”

Ahead of Channi’s swearing-in, Sunil Jakhar reacts to Rawat statement ‘elections to be fought under Sidhu’ as baffling