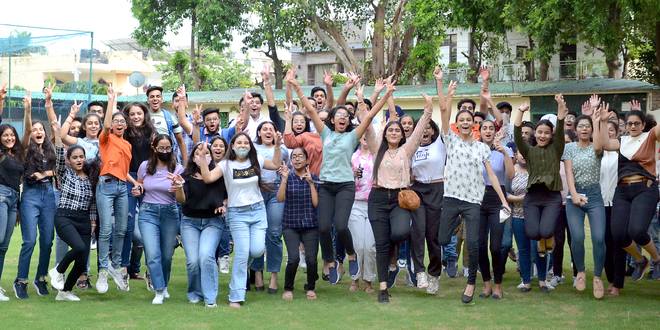 Students of Innocent Hearts School in jubilant mood celebrate their success after declaration of CBSE Board class 12th result 2021 in Jalandhar on Friday. Photo Sarabjit Singh

Class XII students were elated after the Central Board of Secondary Education (CBSE) declared the results on Friday. Numerous students gathered on the campus of their respective schools for celebrations and to thank their teachers.

Parika of Innocent Hearts topped in Commerce and brought laurels to the school by getting 99 per cent. Amiya Jain stood second by obtaining 98.2. The third position was bagged by Arshita Syal and Devika Padam with 97.4 percent. In non-medical stream, Aashim Sikka stood first (98.2 per cent), Mohit Nanda, Manya Kakkar and Garishma Rana got 96.2 per cent and bagged second position and third position is bagged by Rabia Bakshi and Sajal Jain and Lovya Bajaj with 95.8 per cent. In medical, Garima topped by getting 97.2 per cent, Tarush Dhawan and Chahat Jain stood second with 95.6 per cent and Jannat Saluja stood third by getting 95.2 percent. Dr Anup Bowry, chairman, Innocent Hearts, congratulated all the students and parents.

In Delhi Public School, out of 103 students in Class XII, 44 students achieved 90 per cent and above. Vanshika Chhabra secured first rank by obtaining 98.8 per cent. Soumya Gupta (non-medical) got 98.6 per cent and Jessica 98.4 per cent (medical stream) stood first. In humanities, Muskan Verma secured the first position with 96.8 per cent.

It was a proud moment for Cambridge International School, Phagwara, when the Grade XII result of 2020-21 was declared today. Nisha of humanities stream stood first with 98.2 per cent. Tanisha Sethi of commerce stream ranked second with 97.8 per cent. Jessica (humanities) stood third with 97.6 per cent. In medical stream, Ravneet Kaur secured the first position with 95.6 per cent. In non-medical stream, Tanisha Dhiman secured the second position with 96.6 per cent. A total of 19 students scored above 95 per cent and 57 students obtained marks more than 90 per cent.

Students of Dayanand Model School got top notch positions. Shivam Mittu ranked first (97.7 per cent) in humanities followed by Payal (97.4 per cent) from commerce stream. From science stream, Amneet Kaur and Loveneet Kaur, securing 3rd position and bagged 95.8 per cent. Aastha Rakheja (humanities) got 4th position by securing 95.8 per cent, Gourish (commerce) got 95.4 per cent. Principal Dr SK Gautam gave a red carpet welcome to all the position holders along with their parents and faculty members.