Mana Talwandi village to get sports stadium in his name 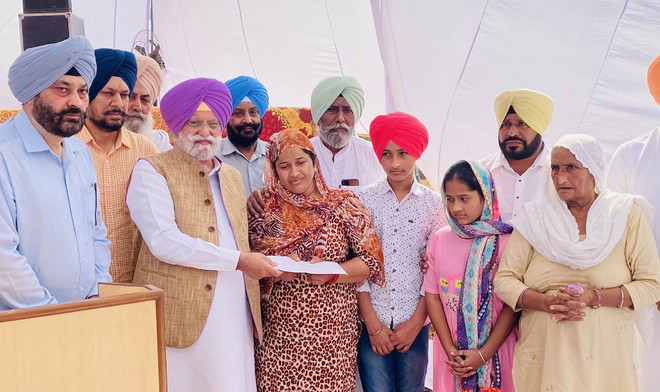 The bhog ceremony of Naib Subedar Jaswinder Singh (39), who made the supreme sacrifice during a terrorist attack in Jammu and Kashmir a few days ago, was today held at his native Mana Talwandi village in Bholath.

On behalf of Punjab Chief Minister Charanjit Singh Channi, Cabinet Minister Rana Gurjit Singh paid tribute to the slain soldier. He also handed over the ex-gratia grant of Rs5 lakh out of Rs50 lakh announced by the Punjab Government to the wife of the martyr. The minister said the remaining ex-gratia grant and the process of giving a government job to a family member of the martyr would be completed soon.

Speaking on the occasion, the minister said Jaswinder Singh’s sacrifice would inspire youth to come forward for the nation’s service by safeguarding its borders from external forces and extremists as per the rich legacy of every Punjabi.

Recalling the role of Punjabis in freedom struggle, followed by wars with adjoining countries, he added, “We always led from the front whenever required to defend the country and provide food security, an example of which cannot found elsewhere in the world.”

He also announced that as per the policy of the Punjab Government, a sports stadium would be constructed in the name of martyr Jaswinder Singh besides providing Rs10 lakh to the village for development works. The minister also announced financial assistance for cleaning and renovation of the village pond.