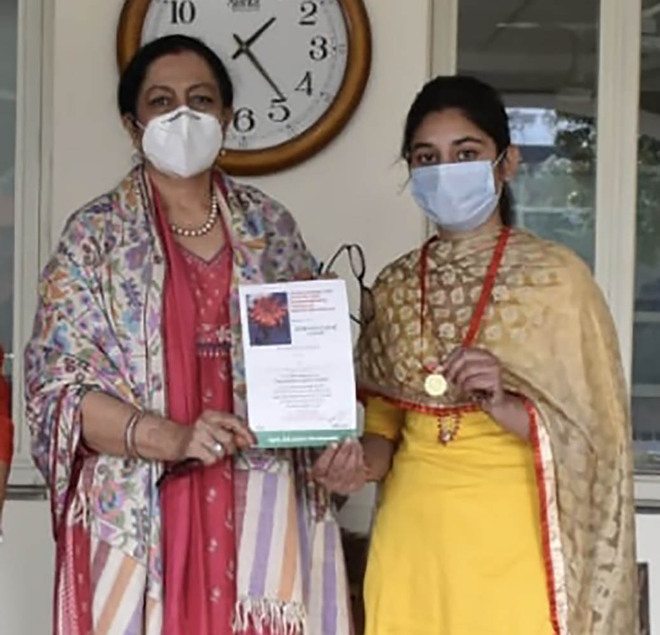 Kanchan of KMV receives a certificate and medal.

Jalandhar: Kanchan, a student of Class XII (commerce stream) of KMV Collegiate Senior Secondary School bagged the overall first position in the country and has been awarded with ‘Paryavaran Ratna’ award and a gold medal in the national-level 25th ‘Paryavaran Ratna’ exam held by the Indian Centre for Wildlife and Environmental Studies in South Asia Region. In this exam, entries from all over India were received. As many as 300 students from all the streams participated in this exam. Principal Dr Atima Sharma Dwivedi congratulated Kanchan for achieving the distinction. She also lauded the efforts of Sadhna Tandon, HoD, Department of Zoology and Environmental Sciences and Sufalica Kalia for motivating the students to participate in the competition.

The students of MA – Music Instrumental(Sem IV) of Apeejay College of Fine Arts, Jalandhar, made their college proud by bagging top positions in university examination conducted by the GNDU, Amritsar. Sehajdeep Singh stood first while Ravinder Jeet Kaur came third in university. Principal Dr Neerja Dhingra congratulated the students and motivated them to keep working hard in future as well. She also appreciated the faculty members of the department of music (instrumental) for guiding students towards sparkling success.

Guru Nanak Dev University has declared the results of BSc Fashion Designing (Sem-VI). Himanshi secured the first position in the university, having already maintained it since three consecutive years by getting 2,714/3,000. Sheeba made it to the fourth position with 2,674/3,000. Mandeep Kaur got the sixth position and Gurpreet managed it to the seventh position by securing 2,639/3,000 and 2,624/3,000 respectively. Principal Dr Kiran Arora maintained that such accomplishments were indeed a feather in the college’s cap.

Mayor World School organised a virtual inter-house science quiz for Classes IX to XII. Each team had four participants who proved their skill in the brain drill. There were five rounds. The students were asked questions related to general scientific principles in the question-answer round. In the visual connection round, four slides were shown to each team and the participants had to find out a connection between them. The third round was ‘Identify the place’ round. Pictures of various research centres were shown and the participants had to identify them. Another interesting round was the ‘Jumble trouble round’ where jumbled chemical formulae were shown and the students had to recognise the compound. The last round was the ‘Rapid Fire’ round. Questions were asked on topics like inventions and discoveries, Nobel Prize winners and recent activities in the the field of science. Principal Sarita Madhok congratulated the teachers and students. TNS