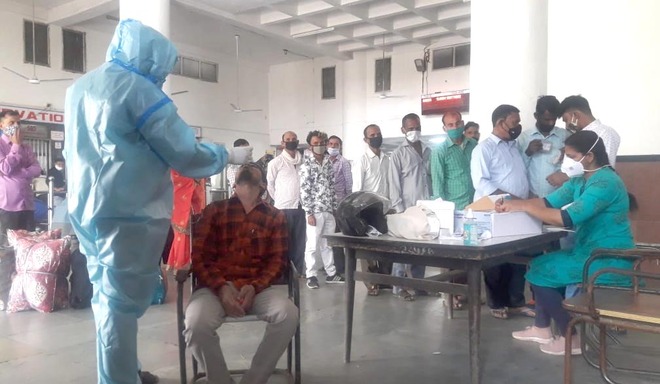 Passengers being tested at the Jalandhar railway station. Tribune photo

In the wake of rising Covid cases across the district, the district administration on Saturday started the Covid testing drive at the city railway station.

A team of doctors and nurses will remain seated at the entrance of the station to monitor passengers coming in and out of the city. Now onwards, passengers will have to undergo a mandatory RT-PCR test at the station. The drive was initiated to trace Covid positive individuals. Moreover, the staff and workers at the railway station were also asked to get their RT-PCR tests done.

Nearly 66 trains are running from the city railway station at present. Hence, it has become the need of the hour to keep a tab on the health status of passengers. “Those who test positive will be asked to isolate themselves. Mobile numbers and other contact details of patients are being registered to trace them. The details of their tests will be sent on their registered mobile numbers,” Deepti Bains, conducting the Covind tests at the station, said.

Apart from intensified Covid testing, the Indian Railways on Saturday also announced that it would impose a fine of up to Rs500 on passengers for not wearing face masks on the railway premises or during travel in trains for a period of six months, said Vikas Jaitley, an official.