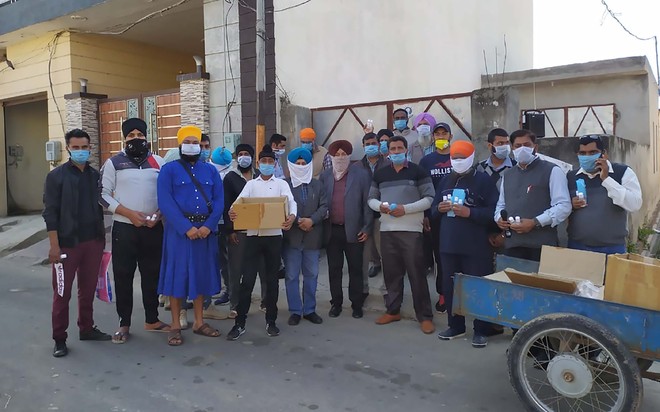 Youths of Pathlawa village distribute ration, masks and other items among residents in Nawanshahr. Tribune Photo

Pathlawa village that reported the state’s first Coronavirus patient is perhaps no longer a hotspot of the disease.

“Of the 418 samples taken from the village, 392 had come negative. While 19 had came positive earlier, one was a case of repetition. Of them, some have recovered. The reports of six samples are yet to come,” said Nawanshahr Deputy Commissioner Vinay Bublani, who had himself gone to the village (risking himself without PPE suit) on the first day to placate the villagers and assure them that the administration was in action after the death of Baldev Singh.

Having reported the first death and 18 positive cases, it has been a 19-day intense fight put up by nearly 600 government employees, including officials of the Health Department and the administration, police personnel, ASHA workers and sanitation staff, which has now provided some relief to the residents.

The fact that Baldev was a functionary of a popular dera in the village and he had been meeting villagers since he returned from Germany and Italy left everyone worried. He had performed a kirtan for a family in the village. He lived in a joint family and had four grandchildren who had their own long list of close contacts.

Immediate strict quarantine of Baldev’s family members, sealing of Pathlawa and 14 other adjoining villages and person-to-person daily monitoring with all multiple contacts of each family member also helped contain the disease.

The shifting of the family members to a Nawanshahr hospital on the intervening night of March 20 and 21 after their reports came positive also helped the administration to tackle the disease. “As soon as we received their reports around midnight, we got into action and got all of them admitted to the hospital by 2 am. Having lost one precious life, we did not want to waste even a minute,” said the DC.

Officials recalled, “On the next day when the sarpanch, his mother, dera head Gurbachan Singh and a sewadar tested positive, we actually got scared. We had already readied 150 beds — 100 at Nawanshahr and 50 at Dhahan Kleran-based hospitals. At that time, we had thought that even these could be less. We had started taking samples in a bulk. Every time when the reports were to come, our heart would begin to sink. But thankfully, we got all reports negative after March 21.”

“After days of treatment, four persons have tested negative. We will send back eight persons home if more reports come negative tomorrow,” said the DC.

Having faced the wrath of public for his father as people started calling him “super spreader” and songs being filmed vilifying him, Baldev’s son Fateh Singh (35) on Monday made an emotional appeal to people after he tested negative for the second time. On Monday, he was shifted from the isolation ward to the quarantine ward.

“The strong willpower as well as faith in the Almighty can help you go through any untoward situation,” said Fateh.