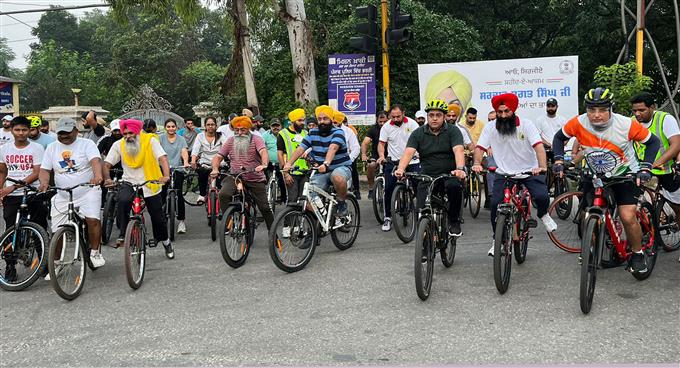 In an exciting match, the Surjit Hockey Academy defeated the Punjab and Sind Bank by 7-2, played under the flood lights on the newly constructed six-a-side ground at the local Surjeet Hockey Stadium. The Surjit Hockey Academy led by 4-2 by till half-time. Sundar Sham (2), Manmeet Singh (2), Sahaj, Ranjot Singh and Gurpreet scored goals for the winning team while Gautam, Jaskaran, Aman Gulati and Raman scored goals for the Punjab and Sindh Bank.

Jalandhar-I Sub-Divisional Magistrate Jai Inder Singh had kicked off the match by cutting a cake. In Nawanshahr, the martyr’s native village Khatkar Kalan was illuminated with lights, evoking patriotism in the hearts of the residents. The people paid homage to the freedom fighter.

During the daytime, Chief Minister Bhagwant Mann presided over a state-level function to commemorate the 115th birth anniversary of Bhagat Singh but in the evening, the administration, with the support of North Zone Cultural Center, Patiala, and Punjabi University, Patiala, celebrated the occasion by organising poetic and theatrical shows, including bhangra, malwai gidha.

In Kapurthala, the district administration organised various events urging people to come forward to serve the nation. A contingent of the Punjab Police also paid a ceremonial salute in the honour of Bhagat Singh at District Administrative Complex.