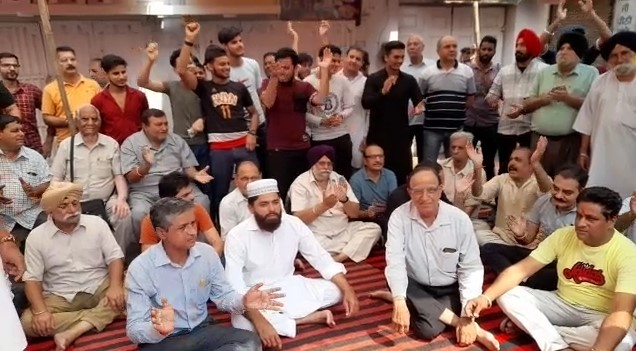 Shopkeepers hold a sit-in in Phagwara on Friday. Tribune photo

Dozens of shopkeepers on Gaushala Road today closed their shops and held a sit-in against the Phagwara Municipal Corporation over the poor sewerage in the area.

The protesters said they were forced to take the step as knee-deep stagnated water after rain had been affecting their business and MC officials seemed least concerned to look into their repeated requests for a permanent solution.

Shopkeepers’ union president Mohan Singh Gandhi said all shopkeepers were facing inconvenience due to the dirty water during rains. “The rainwater seeps into the shops and damage goods. A delegation had in the past met the MC Commissioner. She even assured to solve it soon. When shopkeepers went to meet her again, she passed the buck on to the Sewerage Board, which says that it’s the matter related to the Corporation. The matter remain unresolved.

AAP leaders Nirmal Singh, Santosh Kumar Gogi, Harjinder Singh Virk and others along with Sewerage Board SDO Rajwinder Singh talked to the protestors. After which they immediately called for machinery and started the work of cleaning the overflowing sewerage. Following the action, protesters ended the dharna. — OC

After AAP leaders’ intervention, SDO Rajwinder Singh talked to the protesters and immediately called for machinery and started the work of cleaning the overflowing sewerage. Following the action, protesting shopkeepers ended the dharna