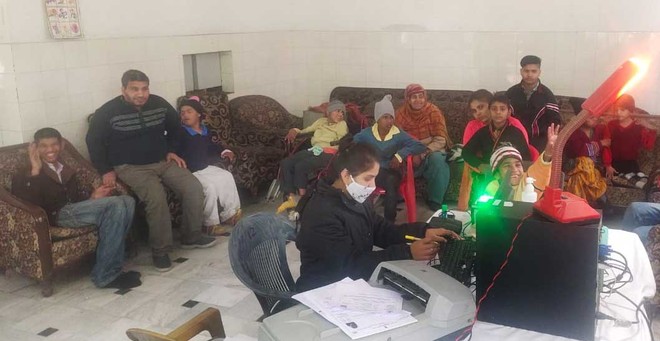 Deprived of state pension schemes and other medical facilities due to the unavailability of identity cards, the inmates of Pingla Ghar on Monday received their Aadhaar cards. The members of state advisory body for the disabled people organised a camp to make Aadhaar cards of the physically disabled and elderly people.

The initiative to avail Aadhaar cards to the inmates was taken by Amarjit Anand, an expert member of the state advisory board for the disabled. He said a camp was set up inside Pingla Ghar to make the identity cards. Biometric and pictures were also taken. “The camp will remain there for the next five days. On the first day, details of only 15 inmates could successfully be taken. One data entry operator and a technical officer has been deployed to make the cards,” Anand said. The camp has been organised under the provisions of the Rights For Persons With Disabilities (RPWD) Act, 2016.

There are over 300 inmates at the Pingla Ghar and none of them are currently availing the benefits of government schemes. As most of them belong to the BPL families, the Aadhaar cards would bring them one step closer to the schemes, Anand said.