Meedhansh Kumar Gupta is only awardee from the state 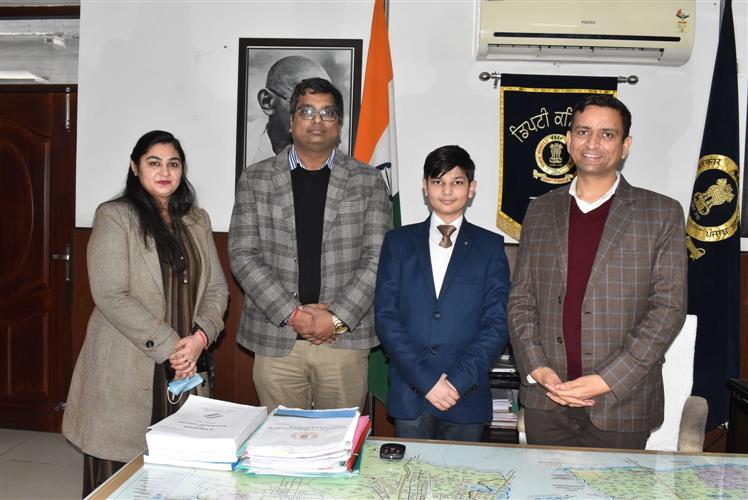 Meedhansh with his parents and DC Ghanshyam Thori in Jalandhar.

City-based boy Meedhansh Kumar Gupta on Monday received ‘Rashtriya Bal Puraskar’ from Punjab out of total 29 awardees across the nation during a virtual conference chaired by the Prime Minister Narendra Modi. Meedhansh was selected among 29 children from across the country under the innovation category.

Ahead of the Republic Day, the Prime Minister had conducted a virtual conference and interacted with the Pradhan Mantri Rashtriya Bal Puraskar (PMRBP) awardees. Each awardee of the PMRBP was given a medal, a cash prize of Rs 1 lakh and a digital certificate. The cash prize was transferred to the respective accounts of winners.

The Prime Minister emphasised that such youngsters could bring positive and necessary transformation in society, which is need of the hour.

While interacting with the Prime Minister from local District Administrative Complex here, Meedhansh said he started to show his potential at the age of 5 years and his first achievement was recorded as a national record into India Book of Records when he was nine as a youngest website developer where he developed his first professional website 21stjune.com and launched on International Yoga Day.

His contribution during the pandemic was also quite appreciable. Within days before imposition of Janta Curfew on March 22, 2020, Meedhansh launched the portal www.coronafreeworld.com where he collected all the disease related information on one platform and also started medical helpline service.

Also, Meedhansh participated in a state-level corona prevention project named Mission Fateh, which was launched by former CM Capt Amarinder Singh and developed the entire IT portal www.missionfateh.com along with various awareness videos as per the guidelines issued by the Punjab Government. For this work, he was given an appreciation certificate by the Punjab Government.

The students were selected on the basis of their achievements in six categories —innovation, social service, scholastic, sports, art & culture and bravery.