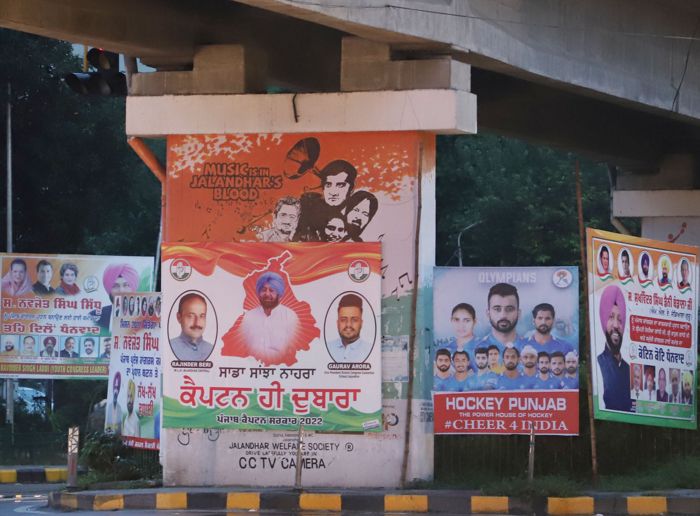 The recent political developments have led to complete defacement of the city. Illegal hoardings have been installed by supporters and political outfits throughout the city.

It all began with billboards of ‘Captain dobara’ (meaning having Capt Amarinder Singh as the CM face once again) across the city by his loyalists during a month-long turmoil in the Congress. Since most MLAs, youth leaders and women activists wanted to show solidarity with Capt Amarinder, such posters were put up very prominently at almost all the locations, including Jalandhar Cantonment.

While the issue was still raging, arrival of Aam Aadmi Party convener Arvind Kejriwal and announcement of electricity sops in line with Delhi model led to another hoardings battle. Though a bit smaller in size, they were put up in all the markets.

As religion and politics started to rage, another set of hoardings dotted the city. Put up by some activists, there has been a demand for having a Hindu face as the next CM. “Punjab ka agla CM Hindu kyon nhi? (meaning why can’t the next CM be a Hindu leader),” read the billboards. Since a lot of politics has been going around giving due representation to the Dalits and other sections of society in the government set-ups and party organisations, these hoardings put across the message by one such group.

Subhash Shukla, a resident, said: “The Assembly elections are still six months away, but the way various political and social groups have become active, it seems that poll are just around the corner. If civic body will not act, the cityscape will further get spoiled. Officials need to stop all such activities, even though most of these hoardings have been put up by leaders of the ruling party.”

Some hoardings can fall apart anytime and pose constant risk to commuters. Supreet Kaur, a student, said: “While I was on way to the market near Guru Nanak Mission Chowk, I saw one such hoarding falling onto the road during heavy rain. I do not understand why the authorities let such hoardings be installed when there are designated unipoles available on rental basis for the same.”

Mayor Jagdish Raja seemed quite casual about the issue and said: “It has been a tradition of the city to come up with hoardings whenever a new development takes place. Since the number is far too high, it may take us a few days to get them removed.”