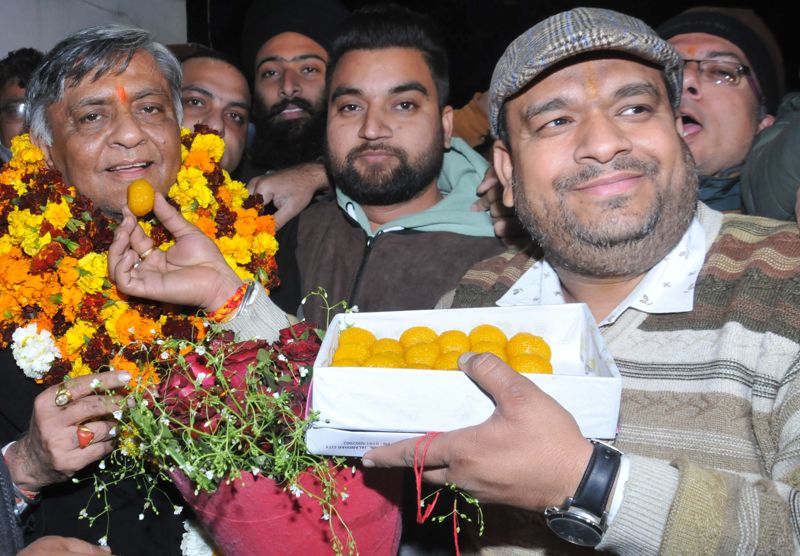 BJP workers in a jubilant mood after Manoranjan Kalia got ticket for the Punjab Assembly election. Photo: Malkiat Singh

The BJP released its first list of 34 candidates for the state here on Friday. In the list, the party declared the names of 11 candidates for 23 seats in the Doaba belt.

In the first list, the BJP has stuck mostly to old guard of the party who had contested from these seats earlier as well. A majority of the candidates announced are from urban segments. In Jalandhar district, the party has declared its stalwart leaders as its candidates who had previously contested from the same seats.

Notably, the BJP has declared candidates from these very seats first due to a sustained presence of the same leaders and due to the party enjoying a greater popularity among the urban Hindu vote bank. From the Jalandhar West, Bhagat will fight against the Congress’s Sushil Rinku and the AAP candidate Sheetal Angural who quite the BJP just days ago.

Bhandari will be contesting against Bawa Henry of the Congress and Dinesh Dhall of the Aam Aadmi Party.

He had taken strong exception to the Kapurthala seat going to the BSP as part of seat sharing between the SAD and the BSP. Keeping in mind the panthic vote in the region, a Sikh face has been fielded from the BJP in Kapurthala.

A seat which was being eyed by BJP leaders Umesh Dutt Sharda and Sham Sunder Aggrawal, among others. Khojewal had joined the BJP only recently at an event held in Ludhiana a month ago. He will face Congress candidate Rana Gurjeet Singh.

From the district, veteran BJP leader Tikshan Sud has been given the ticket. Sud was in the news last year due to his face off with farmers during the farmers’ agitation. Several farmer leaders had dumped dung outside his doorstep for his statement which had not gone down well with farmers. Tikshan has won the Hoshiarpur Assembly seat twice. He, however, faced defeat in 2012 and 2017. On the other hand, the Congress has fielded cabinet minister Sunder Sham Arora for the seat.