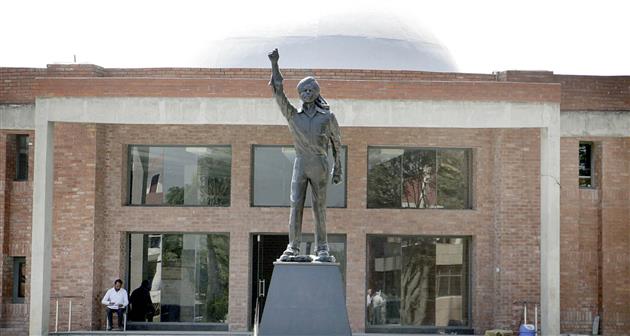 Nawanshahr was renamed Shaheed Bhagat Singh Nagar in 2018 as Khatkar Kalan, ancestral village of the martyr, is located in district.

Nawanshahr district, which was carved out of Hoshiarpur and Jalandhar districts of Punjab in 1995, was renamed Shaheed Bhagat Singh Nagar (SBS) in 2018. There are three Assembly constituencies in the district and both the Shiromani Akali Dal (SAD) and the Congress have a stronghold on these seats. Meanwhile, the Bahujan Samaj Party’s (BSP) strong presence in support of SAD, too, can’t be overlooked.

This time, the electoral battle in the constituency has turned interesting with the ruling Congress, which was already facing a tough challenge from rivals – AAP and SAD-BSP, has another competitor in line – the Bharatiya Janata Party (BJP). Thus all three Assembly seats are set for a four-cornered contest.

In the 2017 Assembly elections, the Congress won two of the three Assembly seats here — Nawanshahr and Balachaur, while the SAD emerged victorious from Banga. Notably, the Sainis, Gujjars and Ravidassia/Adi Dharmis dominate the district.

In this general category seat, where there are around 1.76 lakh voters, the electoral battle till 2012 remained between the families of late Congress stalwart Dilbagh Singh and SAD stalwart Jatinder Singh Kariha. In 2017, SAD fielded Jarnail Singh Wahid against Angad Saini (present MLA) and the latter won even as the family of late Dilbagh Singh contested as a divided house.

Angad is Dilbagh Singh’s grandson and his paternal uncle Charanjit Channi had contested against him as an AAP candidate. Parkash Singh (Angad Saini’s father) and Guriqbal Kaur (Saini’s mother) both have served as MLAs here. Dilbagh Singh has served as a five-time MLA from this district. Dilbagh Singh remained the most powerful leader and was instrumental in establishing Nawanshahr as a district.

This time, the SAD has ceded the seat to its new ally, the BSP. The BSP has positioned Nachhtar Pal, who is the party’s state general secretary. The AAP has nominated Lalit Mohan Pathak, a sitting councillor and former president of the Nawanshahr municipal council. Pathak has a firm grip on the city as he played a vital role in ensuring the city’s best performance in the Swachh Bharat Survekshan.

However, this move of AAP hasn’t gone down very well within the party as a large number of AAP workers filed mass resignation objecting fielding of new comer Pathak over its old volunteer Satnam Singh Jalwaha.

Meanwhile, the Congress hasn’t announced the name of its candidate from the seat yet, but if sources are to be believed, the party will once again give ticket to someone from the late Dilbagh Singh’s family, and it’s either Angad Saini or his mother Guriqbal Kaur, the most probable candidates to get the ticket.

Banga (Reserved) includes martyr Bhagat Singh’s ancestral village, Khatkar Kalan. This constituency, which has 1.64 lakh voters, was bouncing between the Congress and SAD in the previous five elections. SAD’s Dr Sukhwinder Sukhi, an ENT specialist-turned-politician, is the current MLA of the constituency.

In 2017, Dr Sukhwinder won after getting 45,256 votes, while Harjot of the AAP was runner-up with 43,363 votes. Despite a close contest, she left the party. Satnam Singh Kainth of the Congress lost his security deposit. He passed away soon after.

This time, SAD has again fielded Dr Sukhwinder on the seat. The doctor is popular in Banga for his free medical services to the needy and his work during Covid times in 2020. Meanwhile, the AAP has given its ticket to the son of former Akali MLA Balwant Singh Sarhaal, Kuljit Singh.

The Congress is yet to announce its candidate for the seat. Earlier the buzz was Chief Minister Charanjit Singh Channi’s principal secretary, Hussan Lal will be nominated for the seat, but as he has withdrawn his name, the chances are that the party may field ex-MLA Tarlochan Soondh.

In this general category seat, which has nearly 1.54 lakh voters, has been a stronghold of the Akali Dal. The constituency is Gujjar dominated and it was SAD’s Gujjar leader Nand Lal, who had won the seat four times in a row between 1997 and 2012. Breaching the SAD fortress, Darshan Lal (Congress) won the seat in 2017 and Nand Lal was runner-up.

This time SAD has fielded Nand Lal’s daughter-in-law Sunita Chaudhary, and sitting MLA Darshan Lal Mangupur is Congress’ probable candidate for the seat. The AAP has given its ticket to the daughter-in-law of former MLA Ram Krishan Kataria, Santosh Kataria, while the BJP’s probable candidate for the seat can be Rajwinder Singh Lucky, who recently left the Akali Dal and joined BJP.