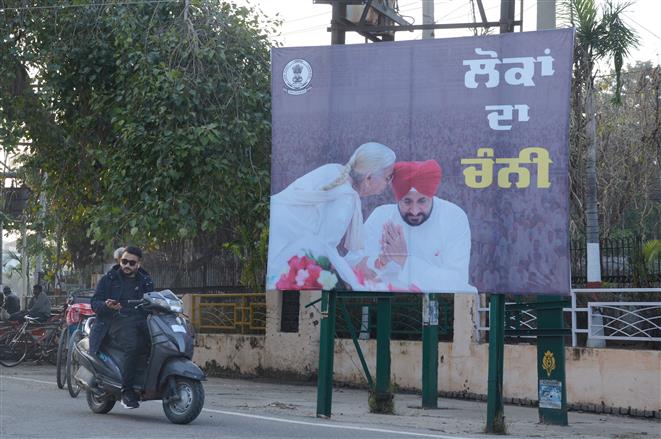 Paying deaf ears to the district electoral officer’s instructions to remove advertisements and hoardings from public and private properties, the political parties have failed to comply with the orders, as hoardings, posters and flags continue to dot the city.

A tour to different locations of the city revealed that big banners of CM Charanjit Singh Channi and Pargat Singh boasting of “development works” still remain displayed near Bus Stand, Urban Estate Phase II, 66ft road, Udam Singh Nagar, Model Town, on national highways and among other places. Besides, flags of political parties and posters could be easily seen pasted on government and private buses, auto-rickshaws and at roadside kiosks.

Similarly, the posters of PM Narendra Modi encouraging people to get the vaccine jab were visible inside the Civil Hospital near Mother and Child ward. The Aam Aadmi Party, too, did not lag behind in littering every nook and corner of the city with their hoardings, which can be easily spotted on 120ft road, PPR, Rama Mandi etc.

Big hoardings could be seen at Kapurthala Chowk, Pathankot bypass, Jyoti Chowk and various other parts of the city, bragging about various projects.

The teams of Local Government Department and Panchayati Raj institutions conducted round-the-clock campaign against defacement of public and private properties to comply with the Model Code of Conduct guidelines.

Deputy Commissioner Ghanshyam Thori said instructions had already been issued to all stakeholder departments to execute the Model Code of Conduct guidelines in letter and spirit. The administration is also getting action taken reports from the different departments including PWD, NHAI, Municipal Corporation, Mandi Board, Forests, Transport, PSPCL etc, he added.

The Deputy Commissioner said certificates regarding no defacement had also been received from the concerned departments. The focus area of executing teams is to remove political posters, banners, hoardings, wall paintings, advertisements from unipoles, electricity poles of Municipal Corporation and PSPCL.

He further pointed out that during the exercise in public places, as many as 40 wall writings, over 5,500 posters, nearly 5,000 banners and 650 other publicity materials were removed by the executing teams.

Similarly, acting against the defacement on private property, the teams had cleared 35 spaces by removing wall writings, 1,200 posters, nearly 550 banners and 20 publicity items.

The DC also said that no one would be allowed to deface public or private properties and action, as per the ECI guidelines, will be taken if anyone found violating the orders.

The Deputy Commissioner urged the people to report any kind of violation on cVIGIL app launched by the EC as it is the best tool to receive and redress complaints within 100 minutes. He said that a total 70 complaints were received of which 65 had already been cleared including 30 from Jalandhar Central and 25 from Jalandhar North constituencies.