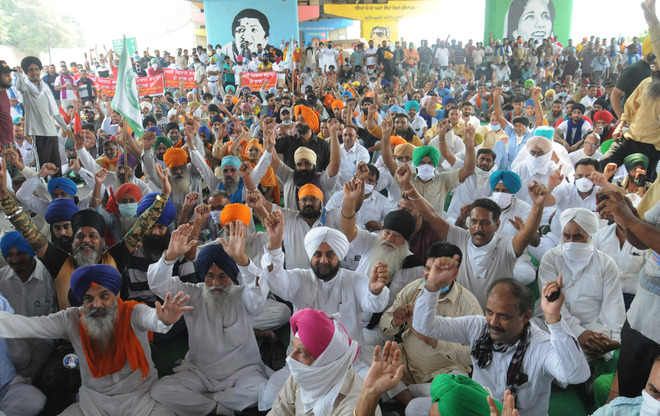 Members of various farmer organisations protest against the farm Bills at PAP Chowk in Jalandhar.

The call of protest against the three contentious farm legislations given by farmer organisations brought life to a complete standstill in the district on Friday.

All markets of the city, including those selling essential commodities, chemists, etc, remained shut for the whole day. Fruit and vegetable markets and mandis also remained closed. The bus stand wore a completely deserted look with buses parked in the depots. Rail services remained completely paralysed.

Milkmen, however, delivered supplies in some areas in the morning. Since internal roads of the city were not blocked, some vehicles could be seen plying, but the overall traffic flow remained thin.

All national and state highways across the district were blocked by farmers with the biggest show held at PAP Chowk. The intersection is crucial as all traffic from Jalandhar towards Amritsar, Phagwara and Ludhiana gets stuck with a blockade here. Local representatives of 31 organisations held a protest here as Congress and Aam Aadmi Party leaders supported them with protests.

Other than politicians, youth and social activists, farmers also got a massive support from engineers of the PSPCL. The engineers wore black badges in their offices and said they were in support of farmers who were their potential customers. Harjinder Bansal, Deputy Chief Engineer, PSPCL, Jalandhar circle, said technocrats of the PSPCL, including SDOs and Chief Engineers, were in favour of the farmers as the Centre had not taken them into confidence before bringing out the Bills.