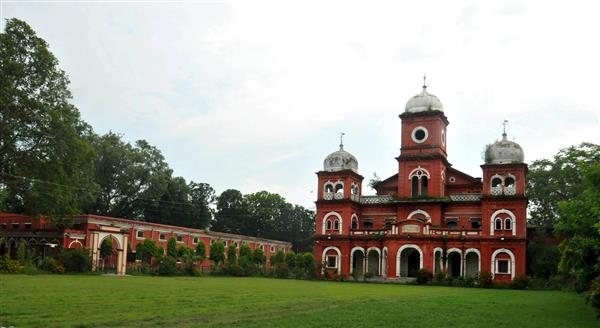 In 1856, when there was no major centre of learning in North India and when education in the region was mostly imparted by religious priests, the Kapurthala Royal family, under the patronage of the British, established the oldest centre of learning in the North — Nawab Jassa Singh Ahluwalia College or the erstwhile Randhir College. Tribune Correspondent Aparna Banerji and photographer Malkiat Singh take a trip down memory lane in the annals of Kapurthala’s glorious educational history.

Established in 1856 as Randhir School, a Sanskrit Vidyalaya, Nawab Jassa Singh Ahluwalia College was a premier seat of learning in the undivided Punjab and is the oldest surviving educational institute in North India. It was set up on a sprawling 33 acres by Raja Randhir Singh, the ruler of then princely state of Kapurthala.

The Jubilee Hall’s imposing facade has three towers that are topped with weather vanes, including one for protection against lightning and thunderstorms. The red and white building features colonial arches, wide verandahs, round windows and magnificently carved entrance door bearing the royal insignia. Presently, in a dilapidated condition, the building which has hosted royal durbars and conferences, cries for repairs. Marked by colonial arches and verandahs, the U-block also features sterling architecture.

The college predates all other noted institutions of learning in undivided North India with the exception of Edwards College, Peshawar (established in 1855). The Government Mohindra College, Patiala (1870), and Khalsa College, Amritsar (1893), had not been established then and the Government College, Lahore, and Foreman Christian College, Lahore, were also established only later - in 1864 and 1866, respectively. The 167-year-old institution — later christened as Nawab Jassa Singh Ahluwalia College in 1978 — is a rare Punjab gem, which is, unfortunately, lesser known in the present Punjab.

In 1857, three universities were established in Calcutta, Bombay and Madras under the Woods Dispatch of 1854 in British India. New centres of education followed across the country under the newly introduced modern education system and the Kapurthala princely state in turn established its own centre. It began as a high school in 1856 and in 1877 it was affiliated to Calcutta University. In 1896, the school was raised to the level of an intermediate arts college and, subsequently, to a degree college in 1945.

A 200-year-old peepal tree — famous for hosting the first classes under it in the guru-shishya parampara — still stands tall on the college lawns.

A magnificent vista lined with Ashoka and palm trees ushers one into a verdant campus with imposing colonial buildings. All historic buildings of the college — including the oldest U-block and the towering Jagatjit Jubilee Hall — are red. The U-block, which is the main building, comprises an administrative hall, library, science block, chemistry and commerce blocks, bio lab, English department, basketball court, gym, botanical gardens and a vermicomposting unit.

The current student strength of the college is 1,081. It also boasts of being one of the government colleges charging the lowest fee in the region.