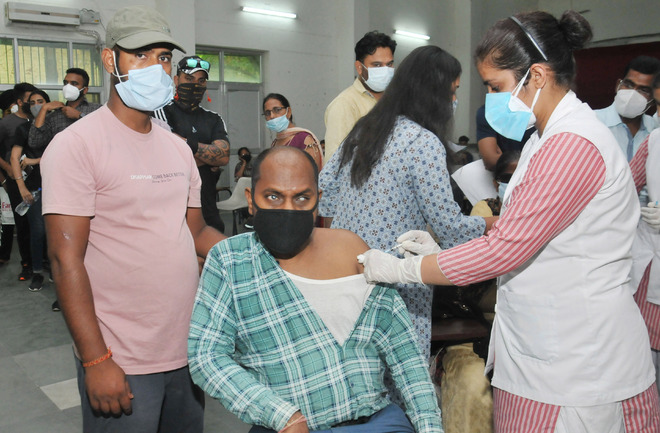 Out of 18,000 people with disabilities (PwDs) in the district, only 750, including their guardians, have been vaccinated at four camps so far. The camps, which were organised by non-governmental organisations (NGOs), stalled due to shortage of vaccination. These special camps were held at the Chanan Association office in Wadala and at some other sites.

The nationwide lockdown imposed last year and the first and second waves had a crippling effect on the PwDs as they were confined to their homes.

While the administration has not taken special initiative to reach out to specially abled amid the pandemic, vaccination camps for the PwDs in the district were started by activist Amarjit Singh Anand.

A few days ago, a poster bearing picture of the Chief Minister was released by Anand to create awareness for vaccinating the PwDs in the state. The poster was shared with the Department of Social Security and Development of Women and Child, but it has still not been released formally.

Anand said, “We started vaccination drive for the PwDs. A total of 750 PwDs, including their guardians, have been vaccinated in four camps held so far. There are 18,000 PwDs in Jalandhar as per rough estimate. We cant organise any further drives as vaccine has not been made available to us. The camps were started by the Chanan Association. There are no special vaccination camps for disability sector. Leave alone door-to-door drive, not even a special camp has been organised for disabled persons.”

He said, “I prepared a special banner to create awareness among 18 plus PwDs to get vaccinated. But the Social Security Department has not released it so far. Disabled persons are on their own and no drive has been organised to reach out to them.”

When Anjali Dada, founder, Soch (NGO), tested positive along with her autistic son, she chose to stay back at home to take care of her son rather than getting hospitalised.

Reason: She knew that there was no medical facility where her son could be taken care of like home. Even after one year of the raging pandemic, the PwDs have been largely been ignored by the government.

Dada said, “Several members of my family, including my son tested positive months ago. The virus affected me badly, but I did not get hopistalised as I knew my son couldn’t be cared for by anyone else like I do. There have been at least three more similar cases in the district. Thankfully, my NGO and I have been providing couselling to such parentsd and helping them tide over the crisis. Our volunteers are also helping with food. Is there any governemnt facility or intiative providing help to such families?”

She said, “The vaccination drive was formally started by Amarjit Singh Anand in the district. Only citizens and NGOs are pitching in to help autsitic and special needs persons in such crisis. The governemnt intiative is missing.”

Jalandhar Deputy Commissioner Ghanshyam Thori said, “There was paucity of vaccine. Today after many days 15,000 beneficiaries have been vaccinated in the district. We have recieved 12,000 vaccines in the 45 plus category. A total of 39 mobile teams are reaching out to people. The District Programme Officer will be directed to ensure proper arragements for the PwDs wherever needed.”

Kapurthala today reported 14 fresh cases, with which the district tally has increased to 17,440. Three persons also succumbed to the deadly virus today taking the toll to 530. The deceased on Saturday have been identified as a 60-year-old woman of Phagwara, a 65-year-old woman of Jatike village and a 60-year-old man of Kadupur village.