Lives with her parents, grandparents and five siblings in a shed 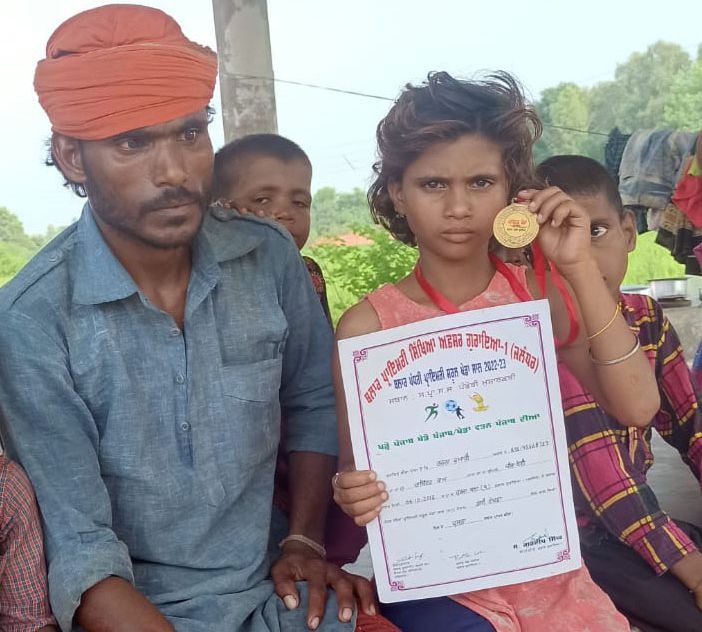 Rachna, 10, has won a gold medal in athletics in primary school games.

When Rachna Kumari (10) won a gold medal in skipping during the tehsil-level primary school games, her father Jatinder, a ragpicker, did not know how to react. It was for the first time that he had seen a medal and a certificate.

Amazed to see her speed

Rachna is a perfect example of resilience. For the tehsil-level games, we did a lot of hardwork. She is very fast. I am amazed looking at her speed. I want her to grow. Buta Ram, head teacher

Jatinder first hugged his daughter and then started to look for a safe and secured place where he could hide the medal and the certificate so that no one could steal it. This is the story of Rachna and her family of 10 who have no house to live. She lives with her parents, grandparents and five siblings. They spend their days and nights in a shed with no boundary wall in a mandi in Rurka Kalan village, Jalandhar. She studies in Class III in Government Primary School (Girls), Rurka Kalan. The games were held on September 16-17.

It has been 25 years since the family moved here to make a living. Ask them why they didn’t take any proper place on rent to live, “Hum gareeb logo ke pass rent dene ke paise nahi hain, hum kahan se denge (we don’t have any money to pay rent),” says Rachna’s grandfather. Buta Ram, the Head Teacher of the school, identified the calibre in the girl when the games were announced and he started the practice sessions of the students. “Rachna is a perfect example of resilience and she is very fast,” says Buta Ram.

First she performed well in block where she attained the second position. Ram also got the girl shoes so that she could run in proper attire. The teacher is now making sure that she gets the right training for the district level also. “I am sure that she will win at the district games too. This is just a start and she will reach heights,” says the head teacher.

When asked what she was feeling on winning gold, the young and budding player replied with a smile, “Bahut acha”. As Rachna has now started practising for the district-level games that may start in the end of the month, her father shares: “Ise apne jaise nahee banne dena, meri beti kuch bada karegi (I don’t want my daugther to become like me. She will defintely do wonders).”