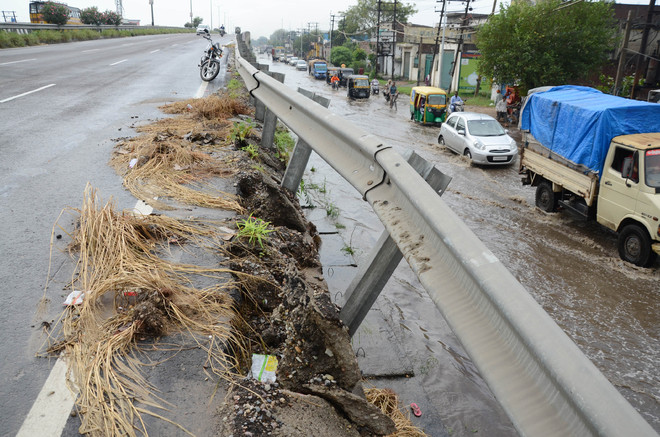 risky affair Railing of a flyover on the Jalandhar-Amritsar Highway gives way after heavy rain on Tuesday. Tribune photo

Following heavy rainfall this morning, the railing of a flyover near Sarb Multiplex on the Jalandhar-Amritsar highway got weakened and turned towards the outer side making the passage risky for the commuters, especially at night.

Not just the railing, even the edges of the road of the flyover have got cracked, broken and tilted downwards towards the service lane. The service lane below the flyover was completely flooded and the water had percolated deep at the base of the flyover owing to no proper drainage provision made by the NHAI during its construction seven to eight years back.

The commuters having been ruing lack of proper drainage system around all the flyovers designed by the NHAI on the NH-1 from Amritsar to New Delhi. It is common to note that the vehicles follow the slope and reach down the flyovers, they land straight into huge puddles of water. The drainage channels created along the highway have always remained clogged and non-functional. All service lanes along the flyovers too remain deluged for the same reason.

Naresh Verma, a resident of Guru Amar Dass Nagar, said: “Commuting via the flyover in the night has become risky and the officials need to get it checked, especially since the road below has also cracked along the edges”.

Mayor Jagdish Raja said: “I will get the site checked tomorrow morning and ask the NHAI officials to check the repair work done. We have been telling the NHAI engineers to ensure proper drainage of rainwater around all the flyovers. Since it is clean, rain water, the NHAI should arrange for groundwater recharging system, which is also the need of the hour. Standing water remains to be a nuisance as it not just damages the roads but also the base of the flyover.”