Will get them repaired: MC Commissioner 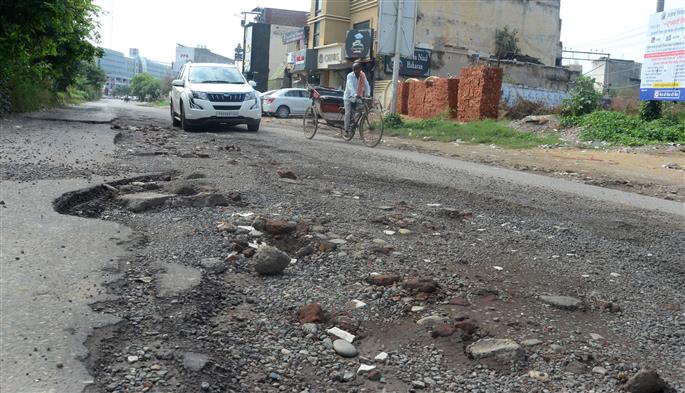 The top surface of a road is missing at PPR Mall, Jalandhar, causing inconvenience to commuters. Photo: Sarabjit Singh

The road at Urban Estate Phase II near MGN Public School and Cambridge School leading to PPR market here lies in a pitiable condition, causing inconvenience to both residents of the area and commuters.

Not only this, even a portion of the road at PPR market, which is one of the most happening spots in the city, is riddled with deep potholes, making travelling a risky affair. Besides, the recent rains in the city have further worsened the situation as many roads have developed potholes and loose gravel can be seen scattered, which can result in accidents.

Commuters alleged the use of substandard material in the construction of the road responsible for the early decay of the road during monsoon. They said the poor condition of the roads has not only made driving difficult for them, but has also increased the wear and tear of vehicles.

Talking to Jalandhar Tribune, Smriti Vadhwa, a commuter, said: “Hundreds of crores have been spent by the MC in the past few years to improve the road infrastructure in the city, but nothing has changed. The roads which were broken for laying sewerage pipes in the past, are still lying in the same condition.”

She said the turn of Urban Estate Phase II road near Cambridge school towards PPR had been completely worn-out and posed great threat to motorists. “Even as the sewerage work on the road was completed long ago, the MC has failed to repair the broken patches, and had even not put interlocking tiles on footpath,” she added.

“The Municipal Corporation elections are drawing near, and once again the political leaders and councillors will make fake promises, but the ground reality is that even after decades, the MC has failed to resolve the most common problems of the city which include traffic, garbage, roads and streetlights”, said Kavisha, a student.

Meanwhile, MC Commissioner Devinder Singh said he would ask the engineers concerned to check the roads in question and get it repaired at the earliest.

Hundreds of vehicles, including school buses, pass through the broken stretch on a daily basis. Those who come to drop their children on two-wheelers are worst affected as they have to wade through deep potholes, risking their lives. — Balwinder Kaur, a parent of MGN Public School student