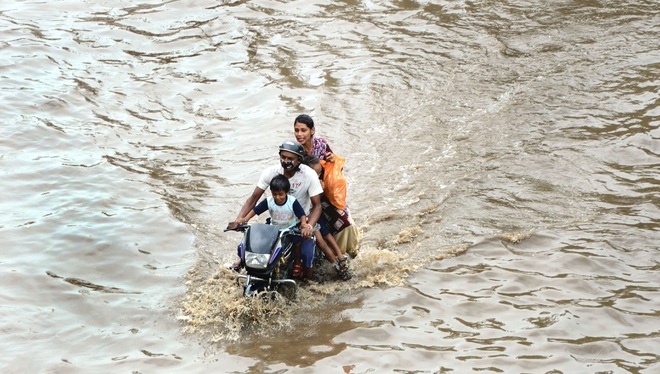 Jalandhar: The incessant downpour for the last two days provided much needed relief to local residents from heat and humidity, but it also played havoc in many residential localities of the district. A visit to various areas of the town revealed that rainwater had accumulated on most of the city roads and streets.

In Dada Colony, the rainwater entered the houses of some residents, thus damaging their property. Residents of the area under Ward No. 63 said the streets were flooded with water within 15 minutes. Bharat Bhushan, a resident said: “The rain again exposed the claims made by the MC about making sufficient arrangement for preventing water-logging. Due to poor arrangement made by the civic body, the road in front of our house submerged in rainwater.” Another resident, Vikas Kumar said, the major reason behind rainwater flooding the town was choked drains, which carry rainwater and sewerage of the entire town. Commuting through flooded roads was not the only problem bothering residents, as accumulated water acts as a breeding ground for mosquitoes and insects, which is more worrisome. “Most of the drains were cleaned and it was only due to excessive rain, that the rainwater got accumulated in some parts of the town,” he said. Area councillor Sushil Kalia said: “The construction of new drainage system and storm sewerage is in progress and hopefully the problem will be resolved shortly.” — Ajay Joshi