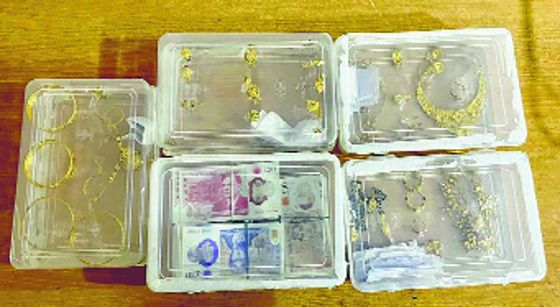 Valuables seized from the two thieves on Thursday. Tribune Photo

The city police claim to have solved the house theft case reported in Baba Budha Ji Nagar at Rama Mandi on the night of December 1, with the arrest of two thieves.

The police have also recovered stolen 290-gm gold jewellery, 9,220-pound (UK currency) and a swift car, which was used in the crime from the accused identified as Harpreet Singh (32), alias Happy, and Paramveer Singh (37), both residents of Ranipur village in Kapurthala.

As per information, complainant Rohan Lal Sharma and his family members had gone to attend a marriage function in their neighborhood when two thieves targeted their house and decamped with gold jewellery and cash worth lakhs and the foreign currency by breaking open their almirahs.

The complainant, in his complaint, had suspected Happy and Paramveer only to have been involved in the theft. Following which, the police team of anti-narcotics cell and CIA-1 conducted a raid at Ranipur village in Kapurthala and succeeded in arresting the accused.

Police Commissioner S Boopathi said during investigation it was found that both the accused were working as electricians at the complainant’s neighbour’s house and had prior information about the foreign currency, gold, etc., been kept in the house.

He said Happy was already a habitual offender as six FIRs under Sections 379, 380, 454, 201 and 457 of the IPC were found registered against him in different police stations of Jalandhar and Phagwara. “A case under Sections 457 and 380 of the IPC has been registered against them at the Rama Mandi police station, and further investigation in the case is under way,” he added.