Ramlila act: These bizmen don a different role for 10 days

Taking leave from work, they ready their costumes, rehearse to give their best on stage 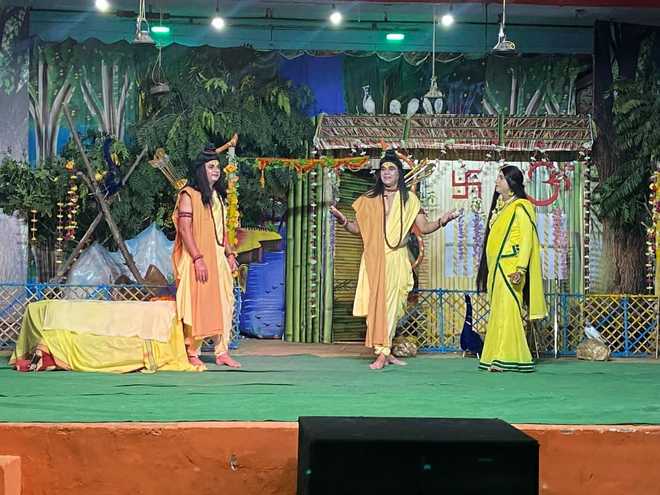 Annually around this time, a bunch of nearly 15 businessmen from the city shun their work for nearly a month so as to don a different role. As members of the Jai Mahabir Club, they all can be seen on stage of Dussehra ground of Basti Sheikh these days performing in Ramlila.

While Gulshan Bajaj, who plays the role of Rama, is a trader of mustard oil, Sunil Shoor, who is seen as Dashrath, is a goldsmith at the local Sarafa Bazaar. Vicky Sharma, who dons the role of Sita, works in a saree shop. Sanjeev Sondhi, who is the director and plays the role of Ravana, runs a box factory.

Taking leave from work or deputing another family member for these days, they work day and night readying their costumes, learning dialogues, doing rehearsals and getting proper makeup so as to give their best on stage and pull maximum crowds.

Fifty-year-old Sanjeev Sondhi, says: “I was just eight when I got into it. My tayaji used to organise Ramlilas and I used to assist him with various works. For the past 25 years or so, I have played the roles of Ravana, Angad, Laxman and Bharat on various occasions. Now, my primary role in the club is direction. I along with my friend Romy Dhanjal, who designs antique wood pieces, are together getting all the role play done.”

He added: “We have done a lot of innovation with the change of time. We telecast the Ram Leela live on our FB page, which gets 60,500-plus views daily. Since today is the day of Laxman Morcha, the viewership will be all-time high. We have added several new scenes in the enactment. We have also readied a Pushpak Viman welding various iron railings and covering it with wooden planks.” A multi-talented artiste, Sondhi also does make-up of some artistes every evening.

Almost all members have an association of more than 20 years with the Ramlila group. Says Gulshan Bajaj: “I have been participating in Ramlila for the past nearly 28 years. I used to perform the role of Laxman earlier but for the last two years, I am playing the role of Lord Rama. It is out of sheer passion and devotion that we are all working to give our best on stage every night. It is not just a 10-days or work that goes into it. Despite performing for so many years, we need to practice for at least a month ahead of the Ramlila for hours to make the show good.”

Sunil Shoor adds: “For 21 years, I have been playing the role of Mahavir but this time I am doing the act of Dashrath. It all started in my childhood days. I was a regular visitor to the temple since 1987 and never missed Ramlila. Watching it with so much passion, I eventually got a desire of role play. Since then, it has been an annual mega event for me which I have never missed, not even in corona days last year. Unlike other Ramlila groups, we do not take costumes on rent, we get them all tailor-made to get the best look.”

Another trend noted is that more than one person from a family is engaged in Ramlila. Sanjeev Sondhi’s younger brother Harsh Sondhi plays the role of Laxman. Gulshan Bajaj’s brother Harsh Bajaj helps the team with dialogue writing. No doubt passion runs in these families.