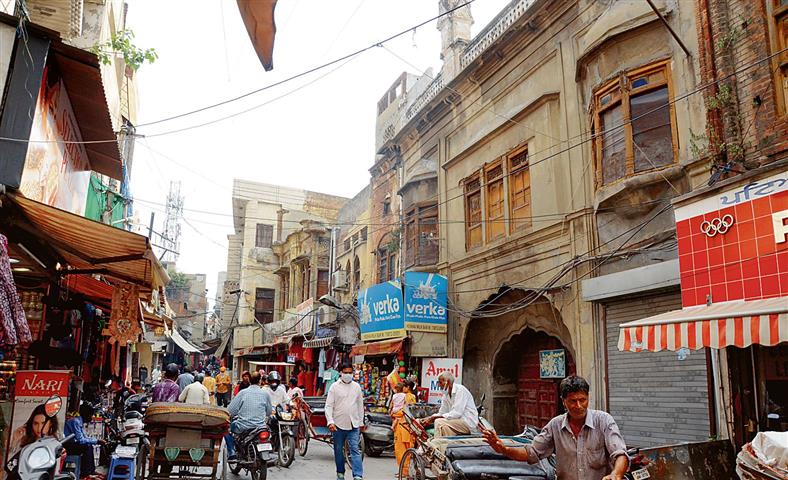 Twelve ponds, 12 gates, 12 sarovars, 12 religious places and 12 kots (walled areas). The sprawling town, which pops out for its whiteness like a white dot on Google maps, was a much vast space several years ago, very different from the densely populated concrete jungle now, which spreads out like a monster gobbling up the greens.

During the time of the Mughals, the 12 bastis of the town, populated by Muslim settlers, began to branch out into kots.

While the town was divided among bastis and kots, the 12 kots were walled areas, where affluent Muslim families lived. With time, the kots have disappeared into oblivion. Their names and legends shrouded in obscurity. The places which were earlier the kots now constitute the busy, congested bazaars of the old city. Only a few have retained their names, while others are referred to by other names.

Deepak Jalandhari, an 89-year-old historian who has carried out extensive research and penned two books on the history of Jalandhar, writes in detail about the kots in his book “Ek Shahar Jalandhar”.

He said: “Much of the history of the city is lost because no on tried to document the buildings or developments. Nor were many of the historic buildings marked or researched upon by the Archaeological Department. Many glorious havelis and palaces of yore fell to decay. Of others, a gate, a wall or a ruinous pillar remains. A majority of these are totally gone. I also know of historic gurdwaras and buildings that were built over or laid over with marble. Now, we can never catch a glimpse of what they looked like. There are others that still stand but are in extremely pathetic condition.”

Historian Chiranji Lal Kangniwal, says: “Back when the bastis were formed, there were repeated attacks against Indians by Ahmad Shah Abdali and Nadir Shah. The bastis were populated by the poorer Muslims, who grew their own food on little plots and gardens and sold vegetables off in the city. They toiled while the affluent lead lives steeped in decadence, travelling the city on horses. The richer ones lived in walled cities, while the poor ones lived outside. These poorer peasants and working class members were called ‘raain’. After Partition, the working class Sikhs, which replaced the ‘raains’ were the Sainis. Following 1947, these outer bastis started being frequented by Kabohs and Sainis.”

Subsequently, rampant development and change in the city ate up the kots and very few traces of the original structures remain today. Deepak Jalandhari says the historic buildings and heritage sites of Jalandhar weren’t documented even in 1861, when the Archaeological Survey of India was formed by the British Government.

The Kot Kishan Chand area is also popular for another legend.

It was frequently used as a hideout for the members of the Kirti Party during World War-II. Historian Chiranji Lal Kangniwal, Ghadar and Independence movement scholar as well as librarian at the Desh Bhagat Yadgaar Hall, says: “During the second World War, the peasantry, under certain able farm leaders, was being mobilised to rise up against the oppression of the British. Many Kirti Party leaders, who were mobilising farmers, were put in jails. Those who escaped went underground and used to organise activities against the British from their hideouts. A rented house at Kot Kishan Chand served as the underground office for several Kirti Party luminaries. Madan Lal, the general secretary of the Jalandhar unit of the Kirti Party, was himself a resident of Kot Kishan Chand and he rented a house to carry out his underground party activities. Madan Lal, along with freedom fighters Nain Singh Dhoot, Bujha Singh, Gandharva Sen, Ram Singh Dutt and Tehel Singh Baghi, were revolutionaries, who mobilised farmers to stand up against the British.”