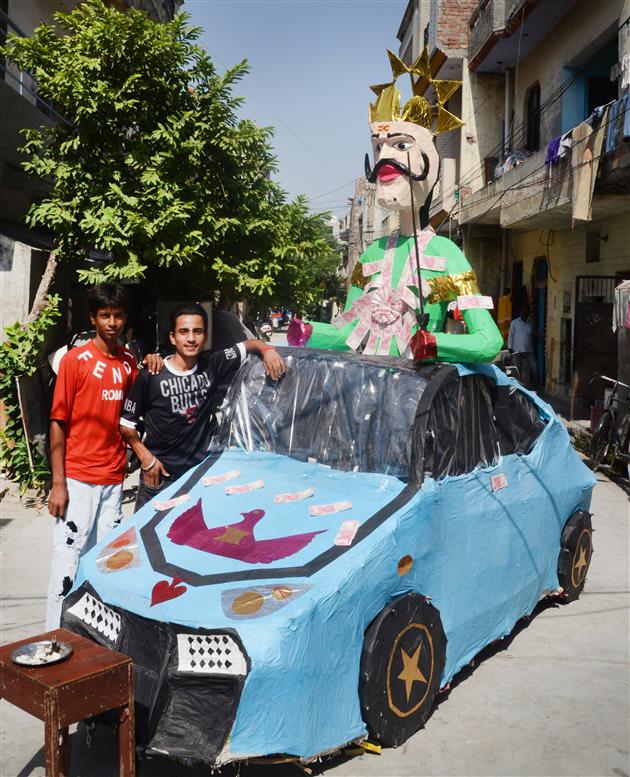 Nishu and Sumit of Bhargo Camp with effigies of Ravana in an open car in Jalandhar. tribune photo

Like every year, this time too, the effigies of Ravana sitting in an open car and on a dragon made by two 16-year-old boys of Bhargo Camp remained the major attraction of Dasehra celebrations in the city. People from across the district specially visited Bhargo Camp to click pictures with the effigies.

Nishu and Sumit, both students of government school at Bhargo Camp, make these kinds of Ravana effigies out of sheer passion.

Talking to Jalandhar Tribune, both Nishu and Sumit shared that they have a huge interest in art and craft, and Dasehra gave them the opportunity to display their talent, thus, every year they hone their creative skills through effigies. They said last year Nishu made an effigy of Ravana sitting in an open car, while Sumit made the one sitting in an open jeep. Besides, they have tried making effigies of Ravana Lamborghini, Mercedes, etc.

“I got this idea of making an effigy of Ravana sitting on a dragon from YouTube. Around Rs 10,000 was spent on it, but the money was contributed by area residents. It took me 40 days to complete it, and the final improvements were made last night,” said Nishu, adding that he would do a profession course in art and craft after he completed his schooling.

Like Nishu, Sumit also took the help of Youtube to make the effigy of Ravana on an open car. “It feels really nice when people from other areas specially visit your locality to take pictures with the effigies made by you,” he said.

Meanwhile, both Nishu and Sumit belong to a very humble background. While Nishu’s father runs a roadside stall of burgers, Sumit’s father works as a tailor.